Book review ‘Safekeeping: Some True Stories from a Life ‘ 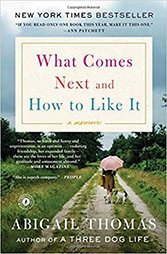 [dropcap]A[/dropcap]bigail Thomas’s book is like comfort food. Through her spare, elegant prose — at once poetic and conversational — she invites her readers, with all the intimacy of an old friend, to partake of her life. Many of her essays qualify as flash non-fiction, with some only 50 words long. But the narrative thread is long, covering Thomas’s three marriages (and three children), with flashback essays about her childhood.

The book is divided by headers: “Before,” “Mortality,” and “Here and Now,” and on the title page is the famous refrain from The Beatles’ “Hey Jude:” Take a sad song and make it better. Many of these essays do just that: she writes of melancholy events — for example, the cancer diagnosis and death of her second (by then ex-) husband — with nuanced depth. Describing the scene in which he tells her he’s sick, she writes, “‘What’s the worst that can happen?’” She loved this man she had once been so unhappy with. “’Well,’ he continues, ‘we’ve all got to go sometime.’ He then shrugged and laughed.”

In “Safekeeping,” the essay for which the book is named, she takes us along on a trip her mother and father took to Switzerland. There, they happen upon a small church. Her mother hears “the disembodied voices of nuns coming from the windows of the church singing the same song they have sung at the same time of day for the last 500 years. “If safekeeping has a sound,” she muses, “Then surely this is it.’”

To my own middle-aged ears, these beautifully-crafted essays read like a tonic. In one, she writes of feeling grateful to turn 50, when presumably male attention begins to fade, and she can “finally get some work done.” In another, titled “What I Know,” she writes about observing a young woman feeding a child in an apartment across the way. Imagining the young woman’s life, Thomas writes, “Maybe she is thinking of the life she won’t have now, although she loves this tiny, human creature she has made out of herself. I know for years she will listen to the radio and think of boys she might have had a different future with. What is this longing, she will want to ask. This troubling feeling of more to come. You can make something out of it, I want to tell her. But that’s what her life is for.”

Thomas, the daughter of biologist and acclaimed science writer Lewis Thomas (1913-93), communicates the highs and lows of life in the most vivid of ways.