Bombshell: The Life of Hedy Lamarr 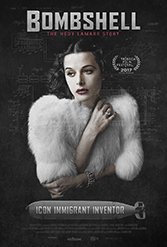 Reflecting on the life and times of his celebrity mother, Hedy Lamarr’s son Anthony Loder, the key narrator of Alexandra Dean’s debut documentary, sighs poignantly and calls her “a woman of extremes.” That she was, but also very much a product of her upper-class Viennese upbringing (Jewishness pointedly set aside) and an erudite European culture that in the 1920s and 30s gave women greater sexual and cultural latitude than they’d ever known before.

Dean’s underlying goal is to portray Lamarr, born Hedwig Eva Maria Kiesler, as a brilliantly misunderstood Austrian immigrant whose beauty concealed a mind keen enough to rivet Howard Hughes and concoct inventions (frequency hopping) that would play a key role in military and telecommunications history but for which she and co-inventor George Antiel received next to no credit until late in her tumultuous life. Sadly, though, the presentation of events is such that what most comes to the fore is an indomitable and fragile soul in consistent romantic and financial trouble, some of her own making, all of it painful. She appeared in an erotic, then “dirty,” film at 16 (“Ecstasy,” 1933) and was pilloried as a whore notwithstanding her Hollywood breakthroughs. Try as she did to make it as a top-line star, she was sidetracked by a mercurial side, including six failed marriages and drug addiction, a downside presented here as the result of lifelong victimization—by producers, actors, cheating husbands, cosmetic surgeons (later) and dishonest institutions. It’s difficult to understand just who Lamarr was without this prism of hurts. What’s clear is that if she was most “abused” by the escalating tragedy of the 1930s, which forced her to America, a country that given the tone of her nostalgia she might otherwise not have settled in. Too often, the narrative is in the hands of misunderstood family or sympathetic biographers.

Still, this is an intriguing look at a moody movie star who sought affirmation she never received. It’s a portrait of vanity and genius, in the vein of female aviators. But add up the pieces of Lamar’s life — she died a recluse — and only one word springs to mind, sadness, which makes a story intended to exalt a woman who said she had “no regrets” into a story tinged if not tainted by melancholy.