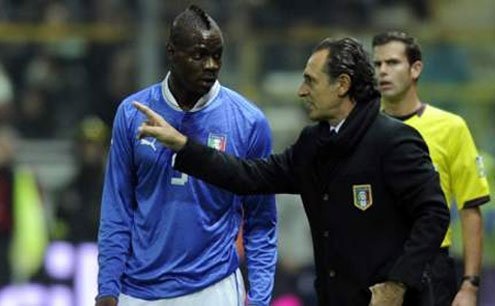 ast November, I noted how the Italian national team was due to undergo changes in personnel and how Cesare Prandelli was right to try out some of the country’s rising stars in the 18 months leading up to the World Cup in Brazil.

It would be fair to say that I didn’t expect quite so many experiments, both in personnel and formation.

Prandelli’s tendency to reward in-form players combined with players’ oscillating between peaks and troughs has resulted in many combinations tested within different systems, leaving the 56-year-old manager seemingly no closer to deciding his strongest starting line up.

The 4-3-1-2, which served Italy so well last summer in Poland and Ukraine, may yet get a second engagement. Playing four central midfielders — traditionally selected from Andrea Pirlo, Daniele De Rossi, Claudio Marchisio, Riccardo Montolivo and Thiago Motta — allowed the Azzurri to enjoy the majority of ball possession and dictate the flow of matches.

But in the 18 months since Euro 2012, Marchisio (Juventus), Montolivo (Milan) and Motta (PSG) have all seen a dip in form, putting question marks over their World Cup credentials. Though all three played a full 90 minutes in a recent 1-1 friendly draw against Germany, they performed well below the level displayed in the Euro 2012 semifinal, when Italy beat Germany 2-1. Then again, Italy has a habit of saving its best for when it really matters.

The main weakness of the 4-3-1-2 is its lack of width — a soft spot Spain ruthlessly exposed in a 4-0 Euro final thrashing. That sorry night in Kiev rightly prompted Prandelli to switch to a 3-5-2 when Italy again faced Spain — which now holds both the World Cup and the Euro title — in last summer’s Confederations Cup in Brazil.

The formation had worked well in Italy’s Euro 2012 group match against Spain, a 1-1 draw that saw Spain look far less threatening than usual. History repeated itself. Italy frequently outplayed Spain in the Confederations Cup match, with Lazio winger Antonio Candreva causing all sorts of problems down the right flank. Had his teammates been more clinical in front of goal, Italy would have secured a place in the final. Instead, it lost on penalities.

Candreva is among the few wingers whose recent form has not gone unnoticed by Prandelli. Sunderland’s Emanuele Giaccherini, who many claim lacks the technical ability to warrant a place in the national side, has impressed down the other wing and scored the equalizer in Italy’s recent 2-2 draw against Nigeria.

Meanwhile, Alessio Cerci’s consistently fine performances for Torino have earned him a couple of caps from the bench. His lightning pace and eye for goal (he has eight this season) make the former Roma man a useful weapon — most likely as an impact substitute.

Since several Serie A sides use the 3-5-2 system, including defending champions Juventus. Prandelli might be forgiven for adopting a model that many of his key players know well and use domestically.

But the 3-5-2 also has inconsistencies. It often failed to live up to its billing in World Cup qualifiers, particularly against lesser international outfits (Bulgaria and the Czech Republic). Nor did it work very well in a 1-1 draw against Croatia in the second group match of Euro 2012.

If there’s an element of certainty (or at least high probability) regarding Prandelli’s plans, it is that his choice of formation will be likely governed by what he feels to be his most potent attacking unit.

If recent matches are any indication, Italy appears to have acknowledged that it can no longer play in a way that presupposes clean sheets. The defensive quality is missing. It is more likely to win matches by outscoring opponents.

It’s difficult to envisage Italy without Serie A’s leading goal scorer, Giuseppe Rossi, who has 11 this season. Indeed, many believe that the diminutive marksman will partner Mario Balotelli in a front two after the pair linked up well in a friendly draw with Nigeria.

This time last year, I suggested Stephan El Shaarawy, Pablo Daniel Osvaldo and Mattia Destro were most likely to challenge for Italy’s attacking positions. But none has done enough over the last year to make them anything more than Brazil outsiders.

Some want Napoli’s Lorenzo Insigne handed a starting berth on the left side of attack in a 4-3-3, a position he would no doubt contest with Cerci. AS Roma’s Alessandro Florenzi has also enjoyed a fine start to the season playing as a right-sided forward in a 4-3-3.

The options are (almost) endless and Prandelli would even seem to have the luxury of actually changing systems depending on his opposition — or even change it midway through a fixture. His extensive experimentation will also have helped reduce the impact of injuries.

My own sense is that Prandelli has a far more talented crop of players than Lippi did. He also has greater awareness of his side’s limitations. Those two facts alone will ensure that he gets the team playing to its strengths when the time comes.