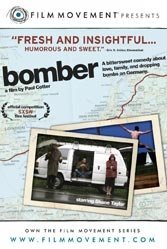 Eighty-three year old Alistair (Benjamin Whitrow) has spent a lifetime pondering the German village that he bombed as an 18-year-old Royal Air Force pilot in World War II. Now he’s decided to find the village, go there with his wife Valerie (Eileen Nicholas), and deliver a belated apology.

When unemployed son Ross (Shane Taylor) decides it might not be such a good idea for his parents to make the cross-Channel trip to Germany alone, it’s the three of them, 1940s aerial photograph in hand, driving around in search of the one-time bombing target.

Ross wants it all to end fast, since leaving in a hurry has complicated his relationship with girlfriend Leslie. His parents, meanwhile, are content to meander secondary roads, with Alistair uninterested in Ross’ problems. Valerie does her best to keep the peace. Which works until Leslie dumps Ross by phone because, she says, “she can do better,” an emotion that seized Valerie as well. Suddenly, Ross is parent counselor and facilitator, encouraging his mother to express herself while hoping to pry open his steadfast father. Ironically, when Alistair does open up, he speaks to people who don’t care or who can’t understand his language.

Writer-director Paul Cotter’s comedy of communication errors is both amusing and poignant. The elders say too little while the younger say too much. Underneath this is reality that the both the open young and the repressed old are unhappy. Eventually, though, the parent-child roles will reverse themselves, and it’s adult children who become more childish than they were as children.

Cotter displays enormous empathy and tenderness for his trio, which they in turn pass on to the viewer. The laughs come as much from self-awareness as situational humor, with Stephen Coates’ music injecting the kind of soundtrack energy every road trip needs.