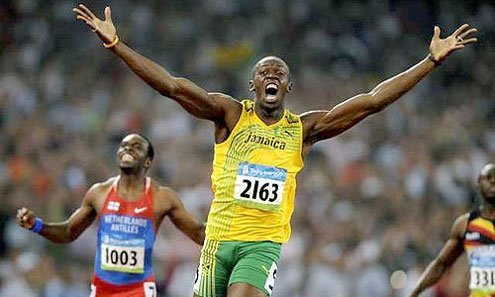 Usain Bolt in Beijing.
U

sain Bolt is faster than words. After demolishing a prestigious field to win the 100-meter gold medal at 2008 Beijing Olympics, the young Jamaican prodigy has now pulverized both that mark and the 200-meter record. All in a week.

In sprinting as in swimming, world bests are usually nipped millimeterically, hundredths or thousands of a second. Bolt has been shearing off whole tenths. Some of the world’s best sprinters, including retired American Michael Johnson, the discipline’s last glamour man, summon hyperbolic monikers. “Superman 2,” Johnson says of the 23-year-old Jamaican.

Bolt is certainly good for athletics, at least in countries where it still matters, and the United States isn’t among them. North America’s obsession with its own sports — particularly pro football and baseball — collides with most of the planet’s devotion to soccer. This is nothing new.

More interesting, and relevant, is how the media-friendly sprints has almost entirely supplanted the middle endurance distances — the mile and the 1,500 meters — as measures of 21st century glory.

Until roughly 30 years ago, more or less the time CNN began peddling the virtues of instantaneity, the mile was a measure of a man’s fortitude. Roger Bannister’s breaking of the four-minute mark in 1954 was news that made global rounds and later added glamour to the metric equivalent of the mile, the 1,500 meters.

Then as now, the middle distances depended on strategy, caginess; it was a chess match on a loop. Sprinters by contrast were the instant-messengers of their day, up and sent in a flash.

Between 1980 and 1995, the middle distances had their halcyon days. In Britain, Sebastian Coe and Steve Ovett repeatedly set and broke the mile and 1,500-meter mark in what became a stirring ping-pong match. Races including both men were headline-makers. They were soon joined by two remarkable North Africans, Saïd Aouti of Morocco and Noureddine Morceli of Algeria. Hicham El Guerrouj later carried the Aouti-Morceli legacy into the 1990s, setting records equivalent to Bolt’s shorter mastery.

In July 1999, El Guerrouj ran the mile in 3:43.13, bettering Mourceli’s mark. In 15 years, the mile record had been cut by a remarkable five seconds. The year before El Guerrouj had also shattered Mourceli’s 1,500-meter mark, running the distance in a still-unparalleled 3:26 flat. He accomplished both of these feats in Rome.

But after that the bottom began dropping out. The mile, a non-metric distance, lost its cache. Olympic track and field broadcasts turned conspicuously to shorter events, reflecting diminished interest in the heat system and waning overall attention span. The Western emphasis on fitness and leisure adopted the long-ignored marathon as a benchmark for endurance, giving the distance status and prize money. American TV put its money on nationalism and speed, Carl Lewis as an incentive. Short sprints got a new life. Michael Johnson was the 1990s torch-bearer, wearing TV-friendly golden shoes at the Atlanta Olympics.

Like the nationalism that helped generate and sustain them, middle distances heroics are relics of a more deliberate and gentlemanly time. They grew up around newsreels and found their heyday just as television itself began accelerating past them, seeking more urgent satisfactions — Michael Phelps’ churning water-limbs among them.

In common with another blue collar sport, boxing, which arose from Industrial Revolution street fighting and mirrored society’s competitive bleaker side, middle distance running, high-brow by contrast, has lost its social subtext. (Boxing’s popularity endured well past its prime thanks mostly to Muhammad Ali’s vibrant cult of personality).

Bolt’s astonishing sprints matter not so much because he runs likes the wind but because in a culture of quickness trained to crave and embrace the immediate, he personifies man as a speeding bullet. His incredible travel over 100 meters of track is an emblem of the non-pedestrian, the strategies and complications distance set aside.