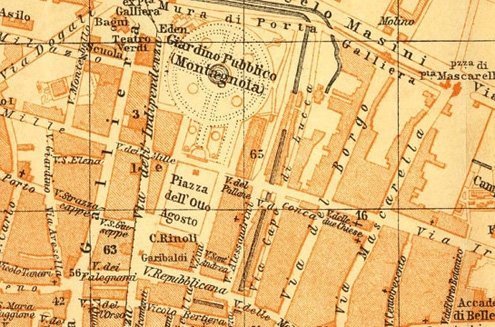 Detail from a 1909 Baedeker map of Bologna.
W

hen I was a student at the University of California at Santa Barbara more than a decade ago people always wanted to know more about my background. After all, I was the Italian visitor. But whenever I got the perfunctory question, “Where in Italy are you from?” to which I’d reply, “From Bologna,” my reply usually got me nothing more than blank stares. “It’s between Milan and Florence!” I’d say, hoping that by mentioning the other cities I’d be associating myself with two more popular kids on the Italian block.

“It has the oldest university in Europe,” I’d volunteer. Nothing. The only thing that seemed to stir a little recognition was when I’d mention Bolognese sauce.

Listening to me go on, Giorgia Olivieri laughs. “That’s all changed,” she insists, pointing out that the New York Times recently ran a piece on what to do in the city over 36 hours (“Dozens of cool new attractions have changed the face of the city, from new ways of eating to new museums and new bars,” the piece gushed, also calling the city “scrappy [and] scruffy.”)

Olivieri and Francesca Blesio are the authors of “Grand Tour Bologna,” a travel guide published by Pendragon in July. The book’s insider subtitle says it all: “A guide to living the city the way the Bolognese do.” Their aim is to make venerable Bologna more relevant to Italians, as well as to an English-speaking audience when the guide is translated.

Bologna, as Olivieri points out, should in fact need no introduction. Two centuries ago the city was a centerpiece Italian destination for international travelers. In part, Olivieri and Blesio seek to recreate that flourishing, 19th-century mood. They want to reacquaint a 21st-century audience with Bologna of the Grand Tour era, a time when young and wealthy Europeans (led by English aristocrats) embarked, Baedeker Guide in hand, on a journey that was part life experience and part classical education, a pilgrimage that usually led them through France, into Venice, through Bologna, on to Rome (some went on to Greece).

The status symbol Baedeker, with its bright red cover, was a beacon in the 1985 James Ivory film version of E.M. Forster’s “A Room With a View,” starring Helena Bonhan-Carter, Maggie Smith and Judi Dench and set partly in Florence. In homage, Olivieri and Blesio have ensured their own guide also has a Baedeker-style red cover, though it’s more manageable in size (the meaty Baedeker often ran 400 pages or more).

The guide is a labor of love, explains Olivieri, who lives in Bologna, as does her coauthor. “We call it a sentimental guide because we experienced everything first hand and we’d like readers to see us as two friends, the hometown kind you call to find out what to do, where to go, and the best places to eat.”

The guide covers city stores, restaurants, museums, galleries, and lifestyle tidbits in general. The two authors made it a point to check out or sample everything they recommend, allowing them to gain deeper insight into their hometown. “Bologna is not only a city you need to see, but one to live,” says Olivieri.

And respect historically. Bologna was a thriving city during and after the fall of the Roman Empire. Its university, the oldest in the world, was founded in 1088. By the end of the 13th-century, Bologna was a textile-manufacturing center with a population of 60,000, making it among the largest cities in Europe (with Paris, Milan, Venice, Florence and Moorish-run Cordoba).

Bologna won over each author in different ways. Olivieri fell in love with the city when she moved there for college. “I spent a day looking for apartments and stopped in Piazza Nettuno,” she recalls. “That moment, under the statue of the Neptune and near the fountain, with a Luca Carboni song playing over and over in my head changed my life.” That’s no surprise, since the monumental16th-century bronze statue is one of the most imposing in Italy, and popular pop singer Carboni is a Bologna native son.

It’s a different story for Blesio, a journalist who was born and raised in the city. “I travel a lot,” she says, “but I can’t sever the umbilical cord with my hometown.”

What should a visitor to Bologna not miss? I ask the authors. “I’d say Piazza Santo Stefano, which I find magical,” replies Olivieri. “It’s also called the Piazza of the Seven Churches, and all those palazzos and churches taken together plus the cobblestones around them make you feel like you’re on a movie set. It also hosts an antiques market every second Saturday.”

Blesio agrees, but she’s thirsty- both for culture, and drinks. “You can’t miss having a glass at Osteria del Sole [Vicolo Ranocchi, 1/d]. It dates back to 1465, which makes it the oldest wine bar in town. It’s also a great scene because you get people of all ages and backgrounds.”

The restaurant is a popular gathering spot and people tend to spill out onto the street, glasses of bubbly Pignoletto wine in hand. “It’s a very lively kind of place that lets you blend right in,” just as the two authors blend in with their city.