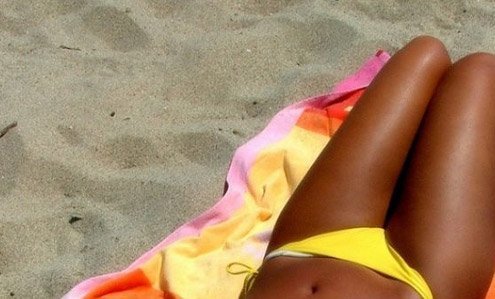 Italian beach visits, particularly among women, are all about getting a tan, never mind your size.
I

t’s August. Italian beaches are bustling with sunbathers, swimmer and loungers. Every morning rows of sun beds are set out under umbrellas on the sand — smoothed the evening before but now spotted with footprints. By noon, brown-orange bodies occupy the beds nearest to the sea prone under the Mediterranean sun.

On Italian beaches, the tan is king. Tanning oil is slathered on, and women and men scoot their swimsuits up or down to expose as much flesh as possible without baring all. The backs of women’s bikini bottoms disappear to expose cheeks, and bikini tops are manipulated to cover only what must be covered. People lay with their legs open to miss browning their inner thighs. Arms stretch overhead in contortions more appropriate to a circus. I once knew a woman who kept a timer at her side. When it went off, it was times to flip over.

I’ve gotten used to the ritual over the years, this parade of flesh for the sake of sun. But early on it shocked me. It’s not that my swimsuit or my views are particularly conservative, just that, in those first summers, I felt an unidentifiable uneasiness sneak through me.

I grew up in West Michigan, which means right-winged Christians taking a day to go to the shores and beaches of Lake Michigan. At home a few summers ago, I spent a hot afternoon at Hoffmaster State Park in Muskegon, the beach of my childhood. Thick, shady pines crowd the road that snakes through the park to the concrete lot that always sizzled.

My dad would unload the cooler, my mom the towels, toys, and the other things that accompany a family of five to the beach. We’d change into our swimsuits in musty restrooms that were more like cabins — one for the boys, another for the girls. Then we’d walk the wooden-plank path through the silence of the forest to the lake. The cool of the woods stopped curtly where the hot sand and wide expanse of the water began. Sitting on the rim of Lake Michigan is like sitting on the sea. The water mimics infinity, yet I always knew that on the other side was only Wisconsin.

On my return, all of these things were the same — it was a reunion with years of memories linked by sand, the concrete lot, and the musty restrooms. But one thing was different. Not different from the “then,” but different for me now, the person who has spent summers on beaches in Italy. Instead of tanning flesh falling out of bikinis or Speedos, I hardly saw any skin at all (or at least, fewer navels and upper thighs). Most women wore what looked like to me like street clothes. And I saw no man in a Speedo.

First, I thought that people in Michigan covered up because of their size. Americans are generally larger than Europeans, and Michigan usually ranks high among the most obese U.S. states. But on Italian beaches, size is ignored. Italian women wear skimpy swimsuits (and men their Speedos) regardless of their shape or size. I’ve seen big Italian women spilling out of bikinis. In Michigan, by contrast, I saw smaller bodies hiding under what looked like a loose tank tops with matching skirts — a swimsuit I later learned is called a “skirtini” or “tankini.”

Watching the Lake Michigan sunbathers, I began to understand that the uneasiness I’d been faced with on my first Italian beach trips had its origin on Lake Michigan. If it wasn’t people’s size then it was something else, perhaps more subtle — an awkwardness I once shared with all those covered bodies.

Three years ago, on another lake, in northern Thailand, I watched men and women of all ages swim with all their clothes on. Jeans, button-up shirts, t-shirts, shorts, everything but socks and shoes clung to their bodies as they kicked through the brown water. After much debate with myself (and sweating in the noontime heat), I decided that I was going swimming in what I was most comfortable wearing: my swimsuit, a bikini. The water felt cool, good and free.

Beaches in different countries expose a variety of social norms about exposure. It’s refreshing that not everyone is like the Italians or the Thais or the people in West Michigan. After all, we go to the beach to swim, to have fun, to relax, to be ourselves. Whatever we are or are not wearing is a side dish. The main course was and remains getting away.