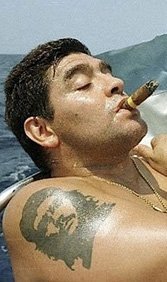 Maradona: All bulked up and nowhere to go.
T

ime now to turn to the ever-longer steroid highlight reel.

Sprinter Marion Jones, she of the five Olympic gold medals, allegedly pumped herself up. The aging Barry Bonds, baseball’s latter-day Babe Ruth, admits to applying dubious creams. Jason Giambi, New York’s fallen slugger, says he turned to steroids beginning in 2001. Ken Caminiti, a one-time Most Valuable Player who insisted half the players in baseball shared his steroid predilection, died in October at 41 of a cocaine overdose.

Canadian sprinter Ben Johnson, who pulverized the 100-meter mark at the 1988 Olympics, was porn-deep in illicit testosterone. Carl Lewis, Johnson’s iconic rival and the Mr. Clean of athletics for two decades, allegedly failed drug tests before the ’88 Olympics (the charges came only after his retirement). Diego Maradona, the Pele of his generation, was expelled from the 1994 World Cup when he tested positive for too many drugs to count. Former Italian Olympic champion Alberto Tomba, nicknamed “La Bomba,” still gets guff over his heyday heft, lower body and thighs like mortar shells. American Tour de France star Lance Armstrong is probed incessantly, more for cycling’s recent bad name than his own: Since 1999, Richard Virenque of France, Italy’s Marco Pantani (dead of a drug overdose last winter) and, most recently, Tyler Hamilton of the United States have all tested positive for steroids or blood-enhancing EPO.

That’s the short list. Most world soccer and rugby leagues, and the shrine of physical bulk — the National Football League — run drug testing programs that are half-hearted or ill-equipped, or both. With secret enhancement methods well ahead of undernourished detectives, no one can quantify the problem, let alone guess how many athletes worldwide are on drugs. Next up is genetic enhancement.

None of this packs much of a shock. Drugs and competition are old bedfellows. Only the promiscuity of doping is noteworthy. In the erotically juiced world of popular spectator sports, rife with dollars and euros, it’s hard to bid for records without help. And since breaking records delivers unprecedented status and cash, pursuing them has turned systematically amoral. Vexed, not surprisingly, is the idealism of natural gifts and righteous achievers.

The modern public is similar to its Roman precursor: It wants powerful and successful gladiators. It likes heroes (and villains) physically adroit and larger than life. It wants to mingle with athletic confrontation and borrow adulation for fuel. For a century, sports idled in an amateur phase where skinny little men broke records and scored goals, even touchdowns, and a slew of un-pretty women captured world tennis titles. There was no television and the real gladiators were men in uniform. Gold medals and football titles meant little in a real world decided on battlefields (Communist regimes, eager to wriggle out of inferiority complexes, beat everyone into doping.)

The visually-stunning 1984 Los Angeles Olympics, boycotted by the Soviets at the height of the Reagan era, moved American sports to ritual ground. Gymnastic marks, simple to understand, received universal meaning: All knew the meaning of a perfect 10, applied to athlete or movie star. With images rushing in, sports took over as a global surrogate for social aggression. Teams of club and country, bonded to fans, could fight available national and ethnic battles through sports (terrorism, outside rules, is not kin).

Athletes now embody what’s left of nationalism. Their exploits lend themselves to hyperbole and exaggeration. They are physically and sexually provocative. Their fashion choices are mimicked. Only professional wrestling seems to have grasped that the outer limits of sport should be parody, not perfection, lest winning at all costs and by all means displace the foible-filled vestiges of amateurism.

Doping makes sense when latched to the primacy of celebrity status in the post-noble age. Briton Roger Bannister, who broke the four-minute mile in 1954, ran against a clock, and against himself. His admirers were located in a tiny inner circle of runners and journalists. Those times were hardly flawless but surely simpler, less scrutinized, and, in the case of American baseball, mostly working class. Babe Ruth drank notoriously and no doubt hit home runs hung-over. But in working man’s folklore that was less disageeable than stalwart. You kept your eyes on the ball. The rest was private. Human beings misjudged and erred. Sports was art, maddening, approximate, and imperfect. It was also not what you did for a living: Bannister, for example, was a neurologist.

Now, sports are a strange brew of industrial science and business. The science is the embroidering of the body so that it turns back age and performs to its peak to attract those fascinated by youthfulness and narcissism. The industry and business side is the peddling of taut bodies singly or collectively as advertisements for an intimate prowess in keeping with the rampant fantasies of mass entertainment. Athletes were always implied sexual acrobats. In an urban culture that advertises fitness and physical strength as a mortality retardant, sexual potency is even more motivational.

So what about doping?

In a sentimental age, working toward heroism might be pure, or purer. But there has never been such an age. Owners pay their professionals lavish wages to get back even more. The best salaries go to proven winners.

Self-righteous outrage over abuse and abusers is unconvincing because the demand that sports legislate more effectively against drug use comes mostly from those wary of health issues, and not from fans, owners, or even national sports federations. In a culture of immediacy, records, titles, and championships are the racy lifeblood of what fans seek and sports sells. They can become their own end in a demoralizing consumer cycle. Good results are heady and produce entitlement among those who provide them. Entitlement, in turn, mars accountability and rules. Bend rules with impugnity and integrity loses meaning. Without intregrity, responsibility has no dominion, making it hard to ask athletes to respect and care for others, or even wish to. They are literally free agents.

Athletes who use drugs to improve their performances are said to betray the everyman fan, and perhaps they do. But try guessing how they got that way.