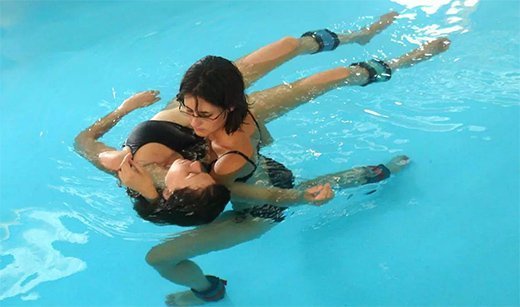 What is watsu? Shiatsu plus hot water.
D

My second husband Alvin and I emerged from our mud packs so blissed out we couldn’t imagine trudging back down to where we were staying in the city. So we asked for a room for the night. “All booked up,” replied the receptionist from under her teased beehive. “And since it’s Christmas Eve so will be everywhere else in town that has a hot pool.” We kept pestering her until she broke. “Well,” she offered, “there is this one place, a good 45 minutes from here, they might have room. But it’s kind of, umm, funky.”

I dialed the number. Yes, they did have hot spring water and yes, they did have a free room. “We have a problem, though,” I said. “We only meant to go to Calistoga for mudpacks, so we didn’t bring any bathing suits along.”

“Oh, that’s okay,” said the voice, “We can arrange something.”

The drive took a solid hour through pouring rain, over roads that shrank to lanes and then to trails. By the time we handed over our parking fee at the gate of Harbin Hot Springs, night had fallen. As we inched forward through the mud, pale figures began to emerge from the darkness, swinging flashlights, and sporting boots but not another stitch of clothing. Both “funky” and “we can arrange something” suddenly made sense: this joint was nudist!

The next morning as we stood soaking to our chins along the edge of the warm pool, exchanging smiles with fellow-hedonists, a burly fellow climbed in as naked as the rest of us, scanned the faces, chose mine, and extended his hand. “You look like you could use a watsu,” he said.

Watsu was invented in the early 1980s by Harold Dull, a San Francisco poet who studies under Japan’s Zen Shiatsu, master Shizuto Masunaga.

“A what?” “Close your eyes and I’ll show you…” The water shiatsu treatment he gave me swishes, stretches and massages along the water’s surface. It was a blissful pas de deux that lasted 10 minutes and felt like forever. In my life, I’d had lots of massages and other kinds of body work, but watsu was in its own league.

As I later learned, watsu was invented in the early 1980s by Harold Dull, who moved to Harbin after making his name as a poet in San Francisco. His inventive spirit transported land-based Zen Shiatsu, which he’d studied in Japan with its inventor, Shizuto Masunaga, into the warm spring waters of the hippie spa. The experience is relaxing and energizing at the same time, somewhere between meditating, flying, and dropping mescaline. At least that’s what it seemed like to me.

After some years of making runs up to Harbin every time I found myself in California, in 2000 I decided I’d try seeing what it was like to take on the other role. Giving watsu treatments turned out to be nearly as mind-blowing as receiving them, and 300 hours of training later I was ready to start practicing bodywork on days I wasn’t seeing patients with colds and cystitis. There was only one hitch: finding the right pool. A watsu pool has to be large enough to swing a client around, calm and quiet enough to permit complete relaxation, just the right depth, and just the right temperature (34-35C/93-97F). Jacuzzis are too small and a heated swimming pools isn’t hot enough. Italy’s many famous hot springs can be perfect for “watsu,” but the closest to Rome is an hour and a half drive away.

After an exhaustive hunt, I found a place in the city that qualified, though barely: an off-kilter urban spa provocatively named Extasia. The water was so shallow I had to work literally on my knees, and the risk that my client might get skewered on a sharp corner that stuck out into the tiny pool kept me figuratively on my toes. Plus, we all couldn’t help but notice one tall white-coated female employee who was always popping in and out of the reception area, sporting a short skirt and a prominent Adam’s apple. But I did manage give a couple of dozen sessions. It didn’t last long.

Next thing I heard, the vice squad had shut the place down. When they eventually reopened, they thought it more prudent to bar outside therapists.

I moved on to the Grand Palace Hotel on Via Veneto, where they were willing, for a fee, to heat their lovely swimming pool to watsu temperatures on special request. But one day it too closed, of its own accord, and when it reopened two years later the new management couldn’t be talked into hosting such a “suspicious-sounding” activity. Alas, I haven’t found a decent substitute yet anywhere in Rome – the only appropriate pool I know is priced out of the running. All suggestions are welcome.

Saddest of all, my beloved Harbin Hot Springs was destroyed in the northern California fires of 2015 and is still struggling to rebuild.