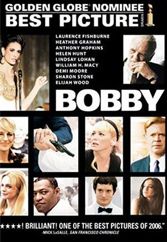 There’s stalwart hotel manager (William Macy) married to in-house hair stylist (Sharon Stone) but carrying on an affair with a switchboard operator (Heather Graham); the Mexicans and Blacks in the kitchen, and their staid boss (Christian Slater); a visiting executive from New York (Martin Sheen) who struggles with depression but wants to re-embrace his wife (Helen Hunt); a washed up cabaret singer (Demi Moore) who drinks to ward off aging; two old cronies (Anthony Hopkins and Harry Belafonte) playing chess and doling out nostalgia in the lobby.

Star-power, period piece setting, and strategically implanted musical snippets from Donavan and Simon and Garfunkel are intended to enforce verisimilitude but backfire because the Rainbow Coalition characterizations are soap opera-thin. Too bad since the documentary footage of RFK is appropriate and affecting. The film has its moments: Fishbourne acts with great physical grace and veterans Stone and Moore both shine. Otherwise, as Fishbourne remarks about anyone else’s peach cobbler but his own, “it has no poetry.” Oh, and in 1968 no one said, “Have a nice day.”