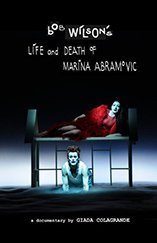 In “Bob Wilson’s Life and Death of Marina Abramovic,”  one of the world’s leading performance artists — the Belgrade-Born Abramovic — has found yet another way to fasten all eyes on her. Italian director Giada Colagrande was commissioned by Abramovic to make this one-hour documentary of Wilson’s production. Its basic premise is that Abramovic has asked Bob Wilson, a skilled and controlling theater director whose favorite actors are Buster Keaton and Charlie Chaplin, to tell her life story and stage her funeral — and she wants to be in it.

Colagrande had access to the principals in the production who are, in addition to Abramovic and Wilson, Willem Dafoe, as the story-teller, and transgender Antony Hegarty (now Anohni), the principal singer and musical composer. While filming interviews, Colagrande avoids repetitive scenes of talking heads, and instead allows her characters to explain themselves and comment on the production while they are in the midst of rehearsals; even they don’t know how the story will be told.

“Life and Death” was staged in Manchester, England, and Madrid, Spain, where it played for more than two months. Some of the footage is from the stage production as performed.

The documentary offers insight into Abramovic’s difficult past and complex personality, as well as into the elaborate staging and highly choreographed and stylized acting that Wilson demands. Every artist and musician in the production is challenged by Wilson, and the result is a nuanced revelation of what it takes to make modernist theater, outside the post-war conventions of realism, naturalism, and method acting.

Those for whom Abramovic is little more than a self-centered diva will see in this film ample confirmation of that perspective.  Everyone else should find something to think about.