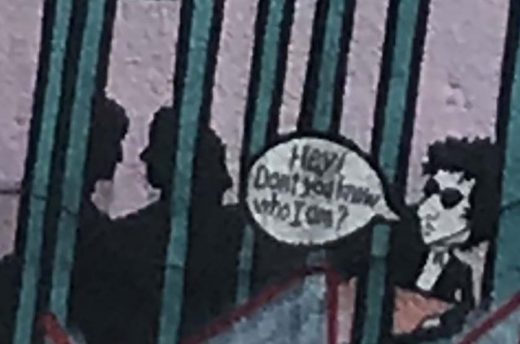 If you look closely at the mural outside, you'll see a Bob Dylan-like figure sitting at a table…
T

he following is a “Crouch End Fantasy” based on a true story as told to me by the bartender at Banner’s Restaurant in North London.

Bob Dylan wants a drink, and he won’t take no for an answer. He’s sitting at a table in the back of Banner’s Restaurant on Park Road in Crouch End. It is August of 1993. Banner’s is a funky little place that serves up a mélange of Jamaican and Indian food — plus breakfast all day. But Bob Dylan doesn’t want breakfast; he wants alcohol. Nothing more.

Maybe he’s just been looking at real estate. Perhaps he wants to buy a place in Haringey, an edgy borough full of artists and writers, poets and musicians, hippies and bums. Maybe he’s waiting on a friend after having knocked at the wrong door and being greeted by a plumber’s wife instead.

“Do you know who I am, young lady?” he cajoles, mumbling just above a whisper, his voice like crinkled tissue paper.

“What do I have to do to get a drink in this place, from a sweetheart like you?” This is what he asks the lovely raven-haired waitress, no more than 24, his son Jakob’s age.

“I’m sorry, sir,” she replies, “but it’s too early to serve alcohol without food. You’ll have to wait for our license hours.” Dylan eyes her nearly faded, snow white scars. There’s a story there, he muses.

“Do you know who I am, young lady?” he cajoles, mumbling just above a whisper, his voice like crinkled tissue paper.

These have been hard times for Bob Dylan. He’s had to rebuild himself after the disaster that was “Under the Red Sky,” released in 1990. After two well-received folk albums, nobody is buying “Red Sky,” In fact, no is really buying much of him at all. So here he is in London, looking or a change.

“Honestly, I don’t,” the young woman tells him. He scowls.

“Oh, well, I’m sorry, but I still can’t serve you alcohol without food,” she repeats, this time meekly, before scurrying away like a mouse caught in the act of pilfering the cheese.

His kid, no older than this beautiful scarred waitress, is selling more units with his band of school chums than either of Dylan’s folk albums, never mind “Red Sky.” He is supposed to meet Dave Stewart, the whiz kid behind The Eurythmics, to talk about working on a joint project with the British band.

All he knows about Stewart is that he has a studio somewhere around this burg, in an old converted church he calls the Crypt. He’s been there before, several times since the 1980s, actually, but he has no sense of direction — that is, no direction known to mankind. That’s how he wound up at the house of a plumber’s wife (who treated him to a cup of tea and some aimless chatter before they sorted out the address error.)

A scrawny fellow appears at the table, obsequious in his demeanor.

“It’s a pleasure to serve you, Mr. Dylan. A real honor to have you in my restaurant. Is there anything I can do for you?”

Bob Dylan has his chance.

“Seeing as you’re the owner, maybe you can wave your magic wand and get me a drink,” he sneers.

“Well, normally, I would love to do that for you, but my license only allows me to serve alcohol during certain hours, and this is not one of those hours. Those are not my rules. Those are the rules of the City of London. Otherwise, I’d be more than happy to give you whatever you wanted.”

Bob Dylan sighs, growing wearier by the minute. “I get the predicament you’re in, good sir. But who’s gonna know the difference? Sometimes you gotta bend the rules, ya know. He who lives outside the law must be honest.”

“Well, if you were to order some food, however…”

“Look, man, I don’t want any food. I just want a drink. Whiskey. Beer. Sangria. I don’t care. Need to wet my whistle.”

His kid, no older than this beautiful scarred waitress, is selling more units with his band of school chums than either of Dylan’s folk albums, never mind “Red Sky.”

The proprietor scuttles off. He’s heard from another pub owner that Dylan had shown up with Stewart and acted surly toward a bunch of rugby players. Best to please the legend and risk the license, he estimates.

The flustered waitress, now red-faced, apologetically comes out with a coffee. Bob Dylan drinks his coffee in silence and orders another, hiding behind the bar. He is still waiting for Dave Stewart to arrive.

And so, the story ends.

Truth is, Bob Dylan never did buy a house in Crouch End, despite all the realtors he pestered. Nobody knows what became of his project with Dave Stewart, either. But there’s a brass plaque at a table in the back of Banner’s, telling the world that the singer (and later Nobel Prize-winner) sat there.

And if you look closely at the mural outside, you can see a Bob Dylan-like figure sitting at a table, probably in the process of saying, “Do you know who I am?”