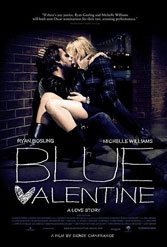 Roland Barthes once wrote that “I love you” loses all meaning after its first and thrilling utterance. “Blue Valentine” delights in the same cynicism. It’s a devastating mood piece launching an armada of clichéd questions: Why endure love’s pain? Why marry?

Yet the sad beauty of ukuleles and tap dancing in city streets are a dead giveaway for director Derek Cianfrance’s unfailing sense of romantic panache. Dean (Ryan Gosling) and Cindy’s (Michelle Williams) endearing and snappy back-and-forth is very much à-la-Spencer Tracy and Katharine Hepburn. The two meet and marry in a matter of days to cover up Cindy’s unexpected pregnancy by another man. Despite these untidy circumstances, the two are far from loveless. Chemistry is electric and surprising. Dean is a manic pixie dream boy who dropped out of high school. Cindy, in too-stark contrast, is closed-off medical student. The only thing they have in common is that they’re broken. Neither one grew up in a happy home.

What a clunky surprise then that marriage isn’t in their blood. And so the film’s beginning is also the couple’s end. They’re years into marriage with daughter in tote. After the tragic death of a pet, whimsical, childlike Dean carts Cindy off to a sleazy space-themed sex motel (“We’re inside a robot’s vagina”) for a final stab at reclaiming her love.

Cindy has no soft spot for the aimless if gifted man who married her in haste. Ugliness tangles with tender adoration while Cianfrance’s direction uncovers heartache in traces: snapshots, sentiment, ephemera. A mental attic of love lost. It’s a film that romanticizes the mysteries of youth while reminding us that by the time we’re old enough to look back, there was never any mystery to begin with.