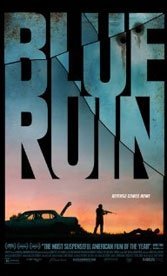 Writer-director Jeffery Saulnier’s nasty little debut thriller is a medieval revenge drama fast-forwarded a few centuries and plopped in the gun-rich backwaters of rural Virginia. Dwight Evans (Macon Blair) is a laconic vagrant with Christ-like beard who forages for leavings near a Delaware coastal resort amusement park. But when he learns that Wade, the man he thinks killed his parents, has won release from a Virginia prison, he squirrels into his battered blue Pontiac and heads south.

Next up is a nasty little group of escalating bloodbaths. Otherwise meek Dwight stabs Wade, thus peeling back the skin on what soon emerges as an incestuous family feud, the Hatfield and the McCoy’s coiled into a tighter spring. Dwight seeks local refuge with his estranged sister, shaves his beard, all the while knowing Wade’s rural kin will come for him. And so they do. Dwight then enlists the help of a high school friend who knows guns. One gun of course leads to another, and the blood pool thickens.

Apocalypse crowds this story’s alleles from the start. Surprises are few. Its strength is Macon Blair, who as a man forced deeper and deeper into alchemy of revenge holds the story by the scruff of its neck and never lets go. Saulnier cuts no corners, keening the whole as lean as prime beef, and as bloody. When avenging hate gets out of hand, there’s no stopping it: end of story.