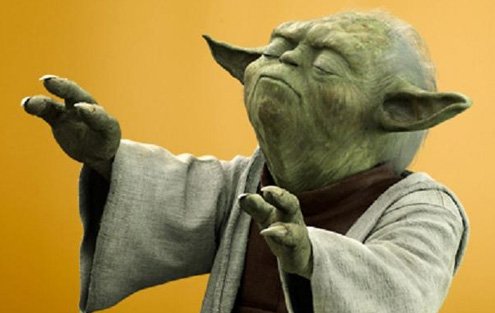 What, no message for students?
W

ith the new “Star Wars” movie out, Yoda seems more relevant than ever. “Fear is the path to the dark side. Fear leads to anger. Anger leads to hate. Hate leads to suffering.” Which makes me wonder how Yoda would have handled Christmas. “Holidays lead to parties. Parties lead to mingling adults. Mingling adults lead to questions. Questions lead to The One.”

• How you want to answer: Well, I don’t know. I just handed in my Women and Gender Studies essay and I’m really worried I may have plagiarized in the fifth paragraph, but I’m also worried that I over-cited and Professor Tubbins will think I don’t have any original thoughts. I also think I failed my Calculus exam because I forgot how to deal with factorials, and I confused the secant and cosecant graphs again. It’s not really my fault cause my professor was gone for three lectures for a cryptology conference in Darmstadt, Germany, so we had a substitute who explained things differently. That was tough.

Also, I have been distracted in class because I just haven’t been eating really well. The dining hall I normally go to is the one farthest from the library, so I just go to the closer one that’s stocked with comfort food. Basically, I’ve been getting a ton of carbs, but no proteins and vitamins, which everyone knows are really important when you are studying. Also, I read an article that says that caffeine is really bad for you so I’ve been trying to cut down on drinking coffee, which has been making me really shaky and anxious, which a blog post said was a side-effect of withdrawal from an addiction. But the other day someone tweeted an article about how caffeine is actually good for you, so now I’m really confused and I’ve been alternating between coffee drinking binges and completely cutting it out of my diet. Also I’ve been really avoiding almonds, which normally make up a huge part of my diet, because of the drought in California. But then I feel bad because I think maybe me buying Californian products helps the farmers from really being hurt by the drought. But at the same time the almonds use so much water, including some shipped from elsewhere, which is really bad, and I want to help save the planet.

It’s not like politics has been helping. I mean I’ve been really busy with my extra-curriculars lately because the Paris Environmental Conference means that my eco-group “Saving Seals and Cypresses” has been hosting a ton of events and setting up peaceful protests. Plus a ton of celebrities are doing the flower challenge, where you pose with a flower and then tag other celebrities or friends in the picture to raise awareness for the conference and the planet’s condition. So I suggested we do something like that in my eco-group, and I said I’d run it because I know if someone else does it, like Becky H, she’ll make it really bad cause she’s not really good at the aesthetic stuff. I mean, she gets the politics, but she doesn’t understand how to make it look pretty so everyone will want to do it. At the same time Becky V. and Jessica are really annoyed at me cause they think all my proposals for the eco-group are a badly disguised bid at presidency of the club for next year, but it’s really not.

And fine, maybe I am really having a hard time because my boyfriend of two years just dumped me. But it’s not my fault. I mean what would you think if he says he can’t make it to the formal, the same formal where we met freshman year? I mean I understand it’s a hard time for everyone, but when I got mad at him I wasn’t expecting him to end it! And then he got really mean and said that I stress too much and that the fact that he has to be scheduled into my life maybe proves that we’re not working. He said he wants someone who’s more fun and spontaneous!

Oh I’m sorry Andy, I guess that’s why Bill and Hilary have such a strong marriage, cause they’re spontaneous. And I’m just bringing them up cause everyone says we’re a power couple. And I didn’t hear Andy complaining about being scheduled in to my calendar when I helped him with his comparative literature paper! Anyway, it’s not that big of a deal. I mean, I’m an independent woman. I don’t really need him. Especially cause now I can finally eat blue cheese again, which I could never do around him cause he was lactose intolerant. And I’m drinking coffee again, which has really helped stabilize me and returned me to my normal self, as you can see.

• How you should answer: School is great, thank you for asking! I’ve been really enjoying classes, and my extra-curriculars are so rewarding.