Blow-Up and Other Stories 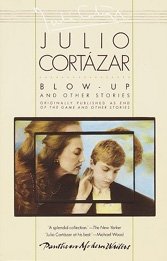 This elegant collection comes in two parts. The first is an essential cross-section of Cortázar’s numinous stories in which voice, tense, gender, perspective and setting are agents of alchemy and menace. Statues cast spells. Men turn into lizards. Lovers vomit bunnies. Aztecs board motorcycles. The second is “The Pursuer,” a choppy but moving 70-page fictional ode to jazz and Charlie Parker (debauched sax player Johnny Carter in the story).

Magic and madness triumph over jazz. Where else but a Cortázar story does a girl come of age in a household where a tiger lurks unseen? (“Bestiary”). Who else would invent an elderly couple whose apartment is being taken over in sections by disembodied voices (“House Taken Over”). His masterpieces are the brief “Continuity of Parks,” in which an avid reader can’t put down a novel that culminates in his own murder, and “The Night Face Up,” where a Parisian motorcycle rider is unsettled by too-real visions of human sacrifice.

In “Blow-Up,” which Michelangelo Antonioni made into a 1966 film, photographer Michel’s picture of an odd couple in a Parisian park turns into an obsession. “I had poked my nose in to upset an established order.” Cortázar constantly ruffles order to make madness plausible. The closer, “Secret Weapon,” is ostensibly about a love affair between young Parisians after World War II. Until Michéle, who was raped by a Nazi soldier as a child, senses something odd about her eager boyfriend and…

At his best, Cortázar, a jazz-loving Argentine who lived most of his life in Paris, is a virtuoso on par with a handful of 20th century Latin American geniuses.