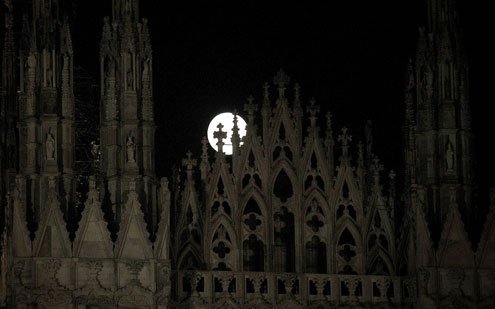 All atmosphere, Pete. The dark heart of Italy in Milan…
D

arkness comes easily to Milan. I woke with that line running through my head. I flicked on the light, found a pen, and took down the words in a slow, careful scrawl.

In the shower I listened to the voice again, a woman’s voice gone husky with desire in some old black-and-white movie. I pictured stone streets, and shadows giving way to dawn. Who the hell was the woman and what was she doing in my skull?

Whoever she was, I liked her line. I could use it for the piece Johnny said he wanted for Cronaca Nera Italiana. “All atmosphere, Pete. The dark heart of Italy in Milan. Secrets lurking in the fog, a dead body floating in a canal. Milano noir, that sort of thing.”

Sure, Johnny. Easy. Not.

I toweled off and pulled on my clothes and put on coffee. I’d stayed up late with Johnny the night before, him smoking foul mezzi toscani and both of us drinking Teroldego, the same one Rita had used for the brasato, its dark, rich flavors sinking into the meat.

Like blood into the earth. The voice again. I recognized it now: Rita, Johnny’s wife. We were talking about her latest painting in her studio after the meal. She had taken up red with a passion.

“Reminds me of Rothko,” I said. “In one of his darker moods.”

“I suppose,” said Rita. She stepped up to the easel and ran her hands lightly over the surface of the painting, a rough jumble of dark, earthy reds. “But I can work with these colors, they don’t make me feel sad. There is nothing depressing about these reds. They are full of life.”

“Like this wine,” I said. I held the glass of Teroldego up to the light. “There’s a hundred different reds in here — the ones you see and all the others around it, hidden beneath the surface. You can taste them.”

Rita raised an eyebrow. Her look said I’d clearly gone a glass too far. “I didn’t know you were a painter, Pete.”

“I’m not.” I dropped my gaze to the floor. It was covered with paint, a dozen different splatters, the red shading off into purples, blues and black. “But sometimes I see things.”

“A good wine will do that.” Johnny sidled up, trailed by a drifting aura of smoke, and came to a halt beside his wife. He stood for a moment, staring hard at the painting. “Looks like blood to me.”

Johnny plunged on. “Blood and wine, closer than we think, the one transformed into the other. A miracle, they say.”

“It’s just paint,” I said, staring into the rich, dark canvas. “The rest is your imagination.”

“Like wine.” Johnny drained his glass. “Drink-and the rest is up to you.” He took a long drag on his cigar, let the smoke leak out from under his mustache, and coughed.

“The world in a glass of Teroldego,” I said. “Intense. Fruity. Rich pigments, ancient terroir and the endless labor of love.”

“And I see blood,” said Johnny. “You see the news today? Or yesterday? Tomorrow?”

“And deep,” said Johnny, slipping an arm around her waist. “That’s my girl.” He leaned in and kissed her on the cheek. Smack!

Rita sighed, rolling her eyes to the heavens above, and pulled away. “Come on, boys, it’s late. I’ll make some coffee.”

I followed the tram tracks home that night. They took me straight, more or less, to my front door. In the morning I woke with her voice and the lines, Darkness comes easily to Milan. It slips into the city like a woman into silk, mysterious and full of unspoken desires.

When I was done I rode the tram to the office, walked into the haze and slapped the page on his desk. “A mood piece, boss. The dark heart of Italy bleeds in Milan.”

And then he read it, slowly, smoke curling up around his head.

Teroldego is a native varietal that’s been cultivated in Italy’s northeastern Trentino-Aldo Adige/South Tyrol region for hundreds of years. For dinner that night Rita chose a “Teroldigo” 2010 — a Teroldego Rotaliano DOC from Fedrizzi Cipriano, Mezzolombardo (TN). Following a method used in the Fedrizzi family until the 1950s and now back in use, it is fermented in cement vats with native yeasts and then macerated with the skins for no more than five days. We drank the first bottle over brasato (braised pot roast) and polenta, the second as the night wore on. As for Rothko, nine of the “Seagram series” paintings now hang in the Tate Modern in London.