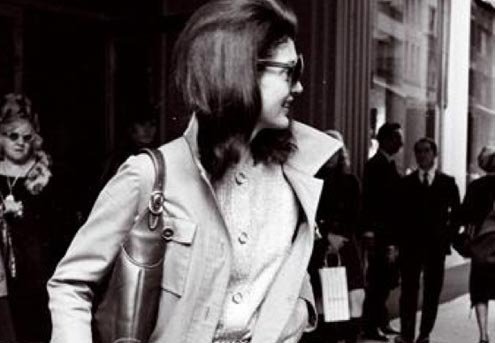 Jackie Kennedy Onasis and the Gucci bag that would bear her name.
T

he first generation creates, the second consolidates, and the third squanders. That old adage suits the Gucci family, whose meticulous style dictated international high fashion and luxury lifestyle trends for the better part of the 20th century only to be undone by bitter infighting, greed and lavish living.

Its rise and fall is an Italian cautionary tale.

Clan patriarch and brand founder Guccio Gucci was born in Florence in 1881. After his father’s millinery business went belly-up and the two fell out, Guccio moved to England in 1897 where he found work as a waiter at London’s posh Savoy Hotel. He admired the fine travel pieces and elegant saddlery of the hotel’s privileged guests. Inspired, Guccio returned to Florence in 1902 and joined the leather manufacturer Franzi, dying skins and learning to craft refined products.

In 1921, he opened Gucci’s flagship store in Florence, accompanied by a nearby workshop where master artisans crafted the travel valises and saddlery that became the foundation of the Gucci brand.

The firm quickly established a reputation for sophistication and excellent craftsmanship, becoming a hit with well-heeled Italians and tourists alike. By the 1930s, Gucci’s products included bags, gloves, belts, and shoes, and its famous Horsebit icon and stirrup motif, nods to Gucci’s equestrian origins.

A League of Nations Embargo against Fascist Italy followed by World War II and its harsh aftermath forced adjustments. With leather and other supplies scarce, Gucci turned to linen, jute and specially woven hemp from Naples used to make the company’s first signature-print suitcases. Another unique material was bamboo, chosen for its flexibility and wide postwar availability. Gucci’s bamboo-handled bags were a sensation when they first appeared in 1947, and remain popular today.

Guccio died in January 1953, leaving behind Gucci outlets in Rome, Milan, London, and New York, as well as four notoriously quarrelsome sons: Ugo, Vasco, Rodolfo, and Aldo. Each grew up cutting skins in the Florence workshop. Vasco and Ugo eventually sold their stake, leaving Aldo and Rodolfo in charge (Rodolfo was an interwar film actor who appeared under the name Maurizio D’Ancora.)

With the help of a celebrity clientele, the Gucci brothers established the brand as an international symbol of modern luxury. Jacqueline Kennedy Onassis carried Gucci’s hallmark shoulder bag later marketed as the “Jackie O.” Rodolfo created the iconic Flora print scarf for Princess Grace of Monaco. Liz Taylor, Sophia Loren and Peter Sellers were all lovers of the double “G.”

Aldo’s move to New York City the year of his father’s death marked the beginning of Gucci’s global ascent. “You are the first Italian ambassador of fashion,” President John F. Kennedy told him when they met at the White House. By 1974, Aldo’s lucrative Gucci expansion included 14 stores and 46 franchised boutiques in the United States, Europe and the Far East.

But the Gucci’s always had a reputation for squabbling.

The acrimony reached new heights when Aldo and Rodolfo’s sons, Paolo and Maurizio, entered the firm. In 1978, Rodolfo fired nephew Paolo from the Italian parent company listing a host of complaints, including the undermining Gucci’s licensing operations. When Paolo tried launching a “Paolo Gucci” brand, his father Aldo fired him from American Gucci.

Paolo’s rage triggered a nasty string of lawsuits against the company that also exposed Aldo for concealing millions in Gucci profits (Aldo would spend a year in prison after pleading guilty to evading more than $7 million in taxes). An egregious spendthrift, Paolo died in 1995 with a debt estimated at a staggering $90 million.

Maurizio, who became Gucci’s primary shareholder at age 25 after Rodolfo died in 1983, faced his own legal minefield. Aldo and his sons accused him of having forging his father’s signature to dodge inheritance tax. More Gucci vs. Gucci lawsuits followed, distracting the family’s attention from the brand’s increasingly precarious financial situation. A Gucci-glutted market, relentless counterfeiting, and a recession, put the company on the ropes.

Aldo and his sons eventually sold off their interests, leaving Maurizio in charge. He hired former Bergdorf Goodman president Dawn Mello as creative director to rehabilitate the brand’s image, but more fighting ensued when a Bahrain-based investment firm Investcorp began gobbling-up Gucci stock in 1987. “I feel like Rocky Marciano,” Maurizio said of sparring with Investcorp in 1993. “Each time he fought, his face was covered in blood, but he always won.” A month later, Investcorp bought out the last Gucci standing for $170 million.

It only got worse.

In 1995, Maurizio was gunned down in front of his Milan office by a hit man hired by his ex-wife Patrizia, whom the Italian press dubbed the “Black Widow.” She apparently objected to her paltry $750,000-a-year divorce settlement. She had sought $1 million.

PPR has said it will donate a portion of ticket sales to support local Tuscan artists, a gesture that helps preserve the original spirit of the Gucci legacy.