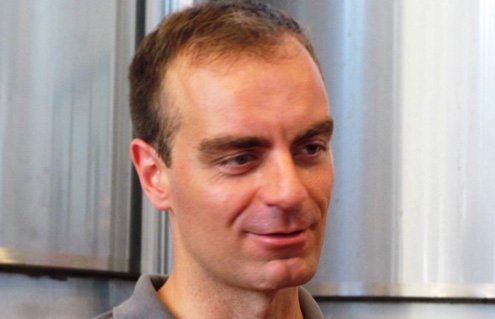 Franceso Galante: "We have the responsibility to develop, to invest and to increase the value of our land."
I

’m always hesitant to utter the M-word. As a Sicilian-American growing up in Boston, I heard plenty of innuendo. What does the Mafia have to do with wine? On my last trip to Sicily I spent a day with Francesco Galante at the Centopassi vineyards. Their vineyards are a superb example of how to make good use of the land that once belonged to the mob.

Centopassi is the Sicilian winemaking arm of Libera Terra (free land), a brand created in 2002 by the social co-ops Placido Rizzotto and Pio La Torre. Each is named after a victim of organized crime — activist Rizzotto was killed in 1948 and politician La Torre in 1982 — and both use Mafia-confiscated land to create a variety of products, including wines. Their flourishing vineyards cover 93 hectares (230 acres) between the Palermo outskirts and the town of Corleone.

The name Centopassi, or 100 steps, comes from the Italian movie I cento passi (2000) about the life and times of Giuseppe “Peppino” Impastato, a young Sicilian radio broadcaster, anti-mafia crusader and labor organizer killed by the underworld in 1978. Centopassi takes Impastato’s labor legacy seriously, contracting dozens of workers to produce high-quality organic wine and food (local unemployment has long been tied to Mafia recruitment of disaffected youth).

I met Francesco Galante at Centopassi’s office to kick off daylong tour, some it through elevated and rugged terrain. A volunteer when he joined the organization in 2006, Galante has since risen to become head of Centopassi’s wine division. We began at the Portella della Ginestra vineyard, itself on hallowed land. It was here on May 1, 1947 that renowned Sicilian bandit and separatist Salvatore Giuliano opened fire on 2,000 peasants demanding better labor conditions, leaving 11 dead. Some say Giuliano acted at the behest of the Mafia, though no one knows for sure. Mafia-backed landowners warred with left-wing peasant movements throughout the postwar period.

In 2011, on my first visit here, I watched vineyard workers busily planting new alberello bush vines in the milk chocolate-colored soil. Today, they dug up soil near wooden poles that support four-year-old Nerello Mascalese, Nerello Cappuccio and Nocera vines. “We have the responsibility to develop, to invest and to increase the value of our land,” Galante told me four years ago. Part of that effort, he said, meant ensuring everyone worked legally and received fair wages — never a sure thing in Italy. Full-time employees receive a traditional Italian contract with pension benefits, an unthinkable advantage in the black market era.

After leaving Portella della Ginestra, we lunched at Agriturismo Portella della Ginestra, situated among the hills and meadows of the Jato Valley. The 17th century farmhouse was refurbished and transformed into a bed and breakfast in 2004. The food we’re served is simple, delicious and organic. Like the wine, all of it comes from Libera Terra territory.

Our day concluded in the cellar, where stainless steel tanks flank large oak casks and barrels in modern but basic facilities. Centopassi funnels most of its investments into the land itself. Some of the wines come from individual vineyards, others from specific plots within the vineyards. The sites for these so-called “cru” wines depend on grape quality, which to my mind is improving every year.

Here’s a short guide to crus, and the crusaders to whom they’re dedicated.

— Centopassi, Tendoni di Trebbiano 2013 IGT Sicilia (14%) €19 • This medium white (from Riina Clan land) is superb with antipasto, fish and shellfish. Dedicated to all Sicilians who opposed the Mafia.

— Centopassi, Cimento di Perricone 2012 IGT Terre Siciliane (12.8%) €19 • This medium-bodied dry red has black cherry, blackberry and dark chocolate flavors that match up well with sausages or meaty fish like tuna or semi-aged cheeses. Dedicated to schools and teachers committed to the anti-Mafia fight, it’s made on land confiscated from Giovanni Brusca, responsible for the 1992 murder of prosecutor Giovanni Falcone.

— Centopassi, Argille di Tagghia Via Nero d’Avola 2014 IGT Terre Siciliane (13.3%) €13 • A dry red with vibrant plum and violet aromas, this wine is delicious alongside meatballs or pizza. Dedicated to the memory Peppino Impastato.