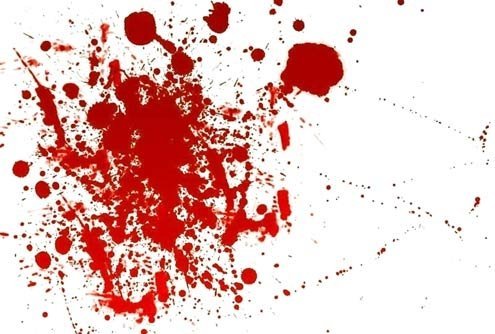 By 2 p.m. the scene had been washed with water. No sign of a crime remained…
O

ne morning, as I left my building, two men ran past me. The second one, middle aged and out of breath, yelled into his cell phone, probably to the police, “Blue cap. On the corner. Hurry!” The first man agile and slim, had already pulled off the blue cap and was trying to dodge traffic and cross the street.

When I returned, an hour later, the intersection was full of police cars. Across the street, the blood-spattered sidewalk was tied off with red and white tape. Blood-stained cloths lay in front of the door.

On my side of the street, people had rested shopping bags on a gate and stopped to watch. They soon informed me that I’d missed the action. Police had entered the building. There’d been a shot. They’d brought out a man in handcuffs. Five people had been injured. There’d been many ambulances, by now all gone. I berated myself for lacking journalistic fiuto, ability to sniff out a story.

Journalists and big TV cameras were starting to arrive now, even though they’d also missed the action.

Someone in the crowd knew the man who’d done it, a schizophrenic. He said if the man didn’t have an injection every month, he became violent. He’d been in trattamento sanitario obbligatorio, mandatory treatment, where, if you didn’t show up for your shot, the police found you and gave it to you by force. The order had expired, however. It’s in force for two years and renewable only if you show that you’re still dangerous to yourself or to others. Someone said that the man would be eligible now.

A woman said they shouldn’t have closed the manicomi — Italy’s state insane asylum’s were closed 30 years ago — because now all the squilibrati were on the loose, stabbing people. Someone answered that, in many places they’d gone back to using electroshock treatments for schizophrenia and depression. When another woman cried, “Oh Dio!”, I said I’d read that shock treatments were safer than they used to be and often effective…

A man noticed my accent and said meno male we weren’t in the United States where everyone had guns. In America there’d be five dead now, instead of five injured. He looked at me as though a gun-waving American could be expected to promote electroshock treatment.

It seemed a good time for me to leave. At home, every now and then, I stood on the balcony to watch the goings-on. A neighbor rang the doorbell and asked if she could take a peek from my balcony since she couldn’t see anything from hers. She said there was always trouble in that building across the street because it was full of extracomunitari.

We watched a woman in a headscarf step onto her fourth floor balcony, look down at the police cars, and go back inside. I told my neighbor the man who did the stabbing was Italian, at least that’s what I’d heard. We watched a white haired man leave the building, stepping on the bloody cloths. Journalists rushed up to interview him.

At 11 a.m., men from the scientifica arrived in their white paper space suits and gray gloves. They left the building carrying plastic bags containing objects. They laid these on the hood of a police car and photographed them from all angles.

At 1 p.m., the red-uniformed cleanup crew drove up in a red truck. They removed the tape and bloody cloths. They threw down red powder.

By 2 p.m. the scene had been washed with water. No sign of a crime remained. The crowds had gone home.

Now, when all was quiet, yet another cameraman showed up. He stood on the corner, looking around. I was shivering in a white, cotton shirt and getting scratched by my balcony rose bushes but I endured the discomfort out of curiosity. What in the world was this guy going to film when there wasn’t a soul around?

A siren blared. The cameraman jumped into position. He filmed an ambulance as it zoomed past and disappeared up the road. He shrugged his shoulders, checked his watch. He leisurely and randomly aimed his camera around the piazza, then gave up and left.

That evening, on the TV news, an announcer narrated the crime of an unstable man who had stabbed five people on a spree. While he was talking, a woman appeared on the screen — a middle-aged woman in a white shirt, peering through her balcony rose bushes. I recognized her.