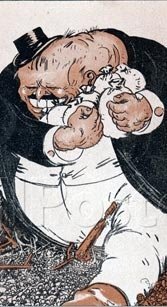 French 1920s poster: "The Real Social Enemy is the Capitalist Who Tramples the People and Grabs the Gold."
A

lsop Osterman and Marcel Dunot were convinced they knew a thing or two about Europe. German instigator Osterman doubted British intentions while gallant French boxer Dunot lifted his fists against the foes of France. “Trust no one” was Europe’s 1911 theme.

France had Marcel of the Iron Fists, “King of Boxers,” who took his nobility around the world and kept at it for two decades.

For century-old European heroes and villains, “sickness,” “contagion,” “worry,” “stress,” and “alarm” were children of national conceit. To them, a common Europe would have been an anathema (and a pulp comic deal-breaker, since what’s a European that doesn’t quarrel?)

Does it mean an end to the euro and the European Union (née European Economic Community), a postwar plan hatched under American auspices and nurtured in the shadow of Soviet communism? No.

What it does mean is that skeptical Britain, newly powerful Germany, deft but disabled France, and chronically tricky Italy have yet to fully extinguish the vestiges of a world that gave rise to Alsop and Marcel and many like them.

Enmity and misgivings remain European hobbies. The euro community’s spayed central “government” is no match for the veteran skepticism of a continent that has spent more than 15 centuries at war. Britain is dubious of all things non-British while Germany loves France in name alone. Italy endures as the best of the worst. Greece is a calamity. So-called “peripheral states,” whether Poland or Hungary, are still mocked in private.

The hopeful continent-building project that emerged from a front created to resist Soviet Russia peaked when times were good and money was easy. But recession has unraveled the skin-deep unity, reviving the bickering that many insisted had been relegated to 20th century immaturity.

But a union is a union, or should be. Half-unions are no more persuasive than half-marriages, or open ones. Most of the 1990s were spent drawing up Europe’s marital guidelines. Predictably, most ended up fast and loose, so as not to hem in the continent’s casino players.

The result is Europe as cranky admixture of performance art and fight club. Beginning in 2009, Greece’s financial “inexactness” — greed mixed with a desire to belong — threw a wrench into euro-toy, generating ongoing arguments over who should fix what, and how, and why the fixing even became necessary.

Germany first balked when asked to repair what it saw as a Balkan bad. Others tarried. Europe lost the credibility it never fully had. Impressionable investors, less than a generation old when it comes to forgetting pulp fiction, lost fundamental faith in “integration” — a clunky word from the start — sucked instead into the wormhole of the “Grey Ghost” and the King of Boxers, with basis points standing in for military buildups and border disputes.

The “he ain’t heavy, he’s my brother” code of conduct that Brussels administrators spent a decade peddling as truth in progress has dissolved into a mess presided over by Franco-German leadership and focused on the shortcoming of others (with “exceptionalist” Britain humming hollow victory anthems in the Algy Brett vein and Germany lukewarm about covering the shortfalls if its “partners”). Aside from formally re-establishing Germany’s regional primacy, European summits have had little effect on marketplace skepticism, the new mob.

But unlike the time of pulp comic book heroes whose dirigible antics presaged the possible and even the probable (after Alsop and Marcel came two world wars), the Europe of 2011 can’t duke this one out. It either stops buying into its own panic (Britain included) or it accepts caroming backward into rival tribes on their euro-less own to reckon with the likes of China, Brazil and India.

If Europe folds, or proves unable to put enough coagulants into its thinning blood, Alsop Osterman and his “Grey Ghost” will reappear on the horizon, wings flapping, Marcel and Algy waiting to pounce.