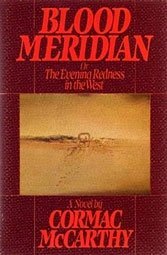 Incomparable is a state that defies aspiration. So is the word unique, often cheapened by useless modifiers. McCarthy’s concoction, the size of a zodiac, with its own terrible and mysterious texture, is both. It is the American Iliad, of arms and men, told by a latter-day Homer who cares more about the transmission of word-corpuscles than the lit conventions of narration. Ostensibly set in the preternaturally violent America West of the late 1840s, the story is for that time but also for all time, as if the Battle of Hastings could cozy up with barbarian hoards and they in turn with marauding mercenaries, all the centuries cumulatively compressed and made to bleed.

McCarthy starts with a boy, The Kid, a teenager from Tennessee, and inserts him into a vision of the endless gang warfare that was the fight along the Texas-Mexico no man’s land, where tribes of whites engaged tribes of Indians, each side drunkenly coming away with a detritus of scalped corpses filtered through hoopla and hurt imposed incidentally by the hard geography of that land. He adds to his cast of characters a seer lunatic named Holden, called the judge; a restless killer for hire named Glanton; and assorted irregulars who ride with these two apocalypse-makers through what amounts to 350 pages of torched and scorched earth.

The prose that ferries them across and about is not kin to what most can imagine conjuring, let alone attaining; it is poetry charred time and again and sometimes made to burn itself whole and alive so that the way of the story is clear. No, this is not common or even utterable stuff, since the horrors and moral structure of the world McCarthy seeks to circumscribe is less the sum of any known reality than the invention of a parallel realm into which the fictional makers of huge frontiers fit. Homer mattered because through him an ancient world of warriors and sages and fire-makers rose from an expanse of Mediterranean nothing. McCarthy matters in this, his greatest book, because he decides on a version of what it is to be human and inhuman and to dwell estranged from the norms of goodness, and language, opening the future to an interpretation that depends on the past, never once blinking.