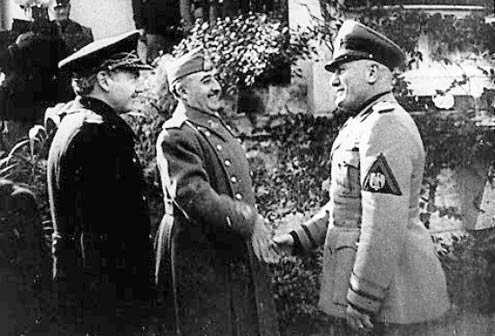 Franco and Mussolini during their 1941 meeting in Bordighera (Liguria), with Franco ally Ramón Serrano Súñer.
T

he most baffling thing in the Spanish war,” wrote George Orwell in his 1943 essay, “Looking Back on the Spanish Civil War,” “was the behaviour of the great powers. The war was actually won for Franco by the Germans and Italians, whose motives were obvious enough.”

The Spanish Civil War was viewed by many as the front line against the rising threat of totalitarianism in Europe. Orwell, whose anti-Stalinist allegory “Animal Farm” and dystopian novel “Nineteen Eighty-Four” rank among the most important, admired and prescient works of the 20th century, shared this view. While serving as a volunteer soldier with The Worker’s Party of Marxist Unification (Partido Obrero de Unificación Marxista, POUM), Orwell took a sniper’s bullet in the throat (he survived) defending Spain’s doomed Republican government from the Fascist forces of General Francisco Franco.

The war erupted in July1936 after a conservative-backed rebel military coup, led by General José Sanjuro, overthrew the Second Spanish Republic, headed by President Manuel Azaña. This paved the way for Franco to seize control of the rebel Nacionales, or Nationalists, and forge a two-and-a-half year war that, in short, ousted the sitting left-wing Republican government, and placing Spain under Franco’s dictatorship for 36 years.

For Nazi Germany’s Adolph Hitler and Fascist Italy’s Benito Mussolini, meddling in Spain’s war held the promise of solidifying a Fascist Europe. And, as atrocities like the German and Italian-coordinated obliteration of the civilian town of Guernica in April of 1937 came to reveal, Spain was the perfect testing ground for the nefarious methods and machines that would be rolled out during the World War II.

Hitler gave Franco a pirate’s booty of Nazi troops, tanks, weapons, and warplanes. But his favors paled in comparison to those of Mussolini, whose allegiance to a conservative Spain stretched back to a clandestine 1934 meeting in Rome. If war broke out, Mussolini told a gathering of Spanish politicians and generals opposed to the Second Spanish Republic that Italy could be counted on for a hefty cache of arms.

Slow to honor his promise when the war began, Mussolini later made good by selling Franco a dozen of the same Savoia-Marchetti SM81 bombers that had recently battered Ethiopia, Somaliland and Eritrea, bringing Italian East Africa into being. In November 1936, just months after Italy became one of 27 countries (including Germany) to sign a Non-Intervention Agreement pertaining to the Spanish Civil War, Mussolini dropped 90 Italian aircraft in Franco’s lap. On the heels of this, he signed a secret treaty with the Nationalists which netted Franco’s forces thousands of tons of Italian bombs, thousands of machine guns and vehicles, and hundreds of mortars, tanks and aircraft. In exchange, Mussolini got the privilege of setting up Italian military bases in Spain if France joined the war.

France and Britain had adopted a tenuous neutrality concerning Spain. Politically, Spain’s Republican government, splintered by the perpetual infighting among its member communists, anarchists and socialists, had the dubious backing of Joseph Stalin’s Communist Soviet Union. France and Britain, weary of both a Fascist European alliance and Soviet encroachment, never effectively intervened. Orwell approached the consequences bluntly: “The Nazis and the Italians gave arms to the Spanish Fascist friends, and the western democracies and the Russians didn’t give arms to those who should have been their friends. So the Spanish Republic perished…”

The Italians also boasted an enormous military presence in Spain. On Feb. 20, 1937, The Manchester Guardian reported 70,000 Italian troops on the ground. (By comparison, just shy of 20,000 Germans fought over the course of the war). The Italian army, air force and an estimated 30,000 of Mussolini’s Fascist guard, the Black Shirts, were instrumental in key Nationalist battles, including at Malaga and Madrid. In Spanish waters, Italian submarines torpedoed ships bound for Republican ports. (Appeals from France and Britain convinced Mussolini to end the ruthless practice). At the Battle of Guadalajara, a fiasco Franco blamed squarely on Mussolini, 500 Italians were taken prisoner, and 400 were killed. The battle had seen Italian forces launch an aborted attempt at encircling Madrid.

Mussolini’s Fascist militia, however, were not the only Italians who risked and lost their lives in Spain. More than 3,000 Italian partisans, galvanized by what Republican defenders deemed as a struggle between “tyranny and democracy,” fought in the volunteer military units that made up the International Brigades, many in designated Italian units like the Figlio and Garibaldi Battalions.

In the winter of 1936, in the guardroom of the Lenin Barracks in Barcelona, a day before enlisting in the POUM, Orwell had a brief and deeply moving encounter with such an Italian soldier. He symbolized for Orwell “the flower of the European working class,” fighting “to win the decent life, which they knew to be their birthright.”

“Shall people like that Italian soldier be allowed to live the decent, fully human life which is now technically achievable, or shan’t they,” Orwell asked in “Looking Back.” “That was the real issue of the Spanish war, and of the last war, and perhaps of other wars yet to come.”