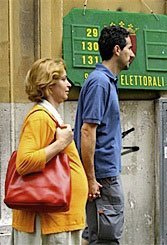 n June 12, 2005 the referendum in Italy to abrogate the law that limits artificially assisted fertilization and research on human embryos failed miserably. Failed, that is, if you wanted to change what was universally considered a flawed piece of legislation.

For the Roman Catholic curia, however, it was not necessarily a failure. For them it could be cynically called it a success—cynically because any organization whose political wing encourages citizens in a democracy to stay away from the polls must be somewhat jaded.

In any case, regardless of the result, many Italians had to inform themselves about the very complicated issues about what should and should not be done with a human embryo. In Italy’s more progressive (i.e. secular) circles, cries of “I knew it” went out: meaning, “I knew Ratzinger was an inquisitor bent on taking us back to the dark ages…” I also heard someone comment that the Church’s position was “inconsistent with their emphasis on life because they want deny so many couples the opportunity to give birth.”

In a way this is true. For a religion that insists on life at all costs — no abortion, no birth control, no reckless unfruitful expenditure of seminal fluid whatsoever — it does seem strange that a married couple unable to conceive naturally is discouraged from being fruitful and multiplying by artificial means.

Like so many Italians, I felt obliged to give the issue serious consideration. In the end, I decided that if I were able to vote (which I’m not because I’m not an Italian citizen) I would have voted yes — with reservations. The reservation being that I accept advances in biotechnology as inevitable, but with extreme trepidation and a healthy sense of hypocrisy.

The trepidation and hypocrisy stem from my conviction that the Church — notwithstanding its sleazy tactic of encouraging people not to vote — has the only consistent and coherent policy with regard to human life. As far as the Church is concerned, human life begins at conception; and from that moment on it should not be terminated. In vitro fertilization and embryonic stem cell research involves preventing the human embryos from becoming fetuses — i.e. “terminating” them.

According to the Church, this is murder. Those who deny that this is murder often do so with the argument that the embryo can not be treated according to the standards of a postpartum human being. And we find ourselves back in the semantic game that these ethical issues tend to create — i.e. “pro-life” vs. “pro-choice, as if anyone would admit to being “anti-life” or “anti-choice.” But there’s one combination of words I’ve yet to come across during this whole debate: “human sacrifice.”

When children were burned to appease Baal, the Canaanites cheered and said: “This is for the good of our society. This sacrifice will make our fields more fertile and our collective lives better.” The same was must have been said when the Aztecs ripped out the hearts of their victims: “This blood spilled for Huitzilopochtliis is for the collective good. This blood will keep the sun in motion.”

Christian doctrine sustains that since Christ was sacrificed on the cross there is no longer any need for human or animal sacrifices to propitiate the divine. Christ has taken care of that for us. And history bears out the fact that Europe and America has seen almost no systematic human sacrifice since the adoption of Christianity. There was a brief interlude with the secret Nazi eugenic experiments, but it was kept quiet and therefore never condoned by the populace as “for the collective good”

What we do have now is an almost tacit form of animal sacrifice, in that will kill animals for scientific experimentation. This practice has led us inexorably to the biotech advances and the ethical dilemma that now confronts us. Are we willing to sacrifice so many humans embryos (and let’s not kid ourselves—this industry has huge commercial potential) for the “collective good”? Thus far we can fecundate women much more easily through the technology available and insure that if the child is genetically defective it can be terminated before it becomes a fetus. We are also making significant headway in researching the use of embryonic stem cells for various diseases, including Alzheimer’s.

Yet the question that lies at the crux of the debate can and should be put bluntly: Is the human sacrifice worthy of the collective good it promises?

The Church is clear and coherent. No human sacrifice. Not even human embryos. In the long run the collective good will not benefit from such a practice.

For those of us like myself, who would vote yes to allow for at least some use of human embryos, it is imperative to examine where we stand ethically. I personally have to come to terms with the fact that I am “pro-life,” so to speak, but not absolutely (and neither, I would add is the Church). I have established my own personal hierarchy with regard to life forms. My family and friends come first, then innocent children, followed by innocent adults. Then come criminal adults. After that you have fetuses, which I consider still very much attached to the body of the mother. Then come human embryos.

After humans you have animals. Dogs, cats and other mammals first, then reptiles, insects, bacteria, and so on down the scale. We could also include the plant kingdom.

So while Pope Benedict rails against relativism, he should also consider how the Church’s doctrinal anthropocentrism would be seen as a ghastly form of relativism by other religious traditions.

Now, having decided that my vote would have been yes, I must admit that I was happy the referendum failed. This is quite simply because I don’t trust the biotech industry. I don’t feel they’ve worked out any sort of ethical policy that could withstand the merest challenge from interests concerned primarily with monetary gain, or worse, eugenic idealism.

So in the end, the failed referendum turned out to be a success in that someone managed to say, “Wait a second, maybe there’s something very unsettling afoot.” And while the rest of the world won’t pay much attention, many of us in Italy have had our first taste of this century’s most pressing philosophical question.

Stash Luczkiw is the editor of Cartier Art magazine, based in Milan, Italy. He may be reached care of The American magazine; letters@theamericanmag.com

About the Author: Stash Luczkiw

Stash Luczkiw is the editor of Cartier Art magazine, based in Milan, Italy.