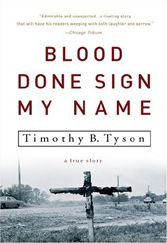 By Timothy B. Tyson

A few words changed Tim Tyson’s life. When he was 10 years old, living in Oxford, North Carolina, a friend excitedly ran up to him one evening and shouted, “Daddy and Roger and ’em shot ’em a nigger!” From this curb-side holler, Tyson, a white professor of African American studies, recounts the racially-fueled events that lead to the murder of young Henry Marrow in the Spring of 1970.

“Blood Done Sign My Name,” a phrase clipped from a traditional African-American spiritual, is a painful autobiographical look at American race relations five years after the purported end of the Civil Rights Movement. Tyson tells his story with wit, passion, and regret as he weaves insightful historical observations with solemn introspection and the occasional comic anecdote. Though a story from the seventies, the themes presented in the book resonate strongly today, nearly a year after Katrina revealed the beast that is race relations in America.