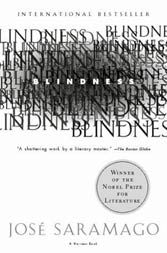 By José Saramago, translated from the Portuguese by Giovanni Pontiero

One after another, people in an unnamed city inexplicably lose their sight. An ophthalmologist examines a patient and then he, too, cannot see. The government opens a one-time mental asylum to house the blind and those it believes are at risk from the “malady.”

As the numbers of the blind grow, so does panic. “We’re going back to being primitive hoards,” says one man, “… thousands of millions in an uprooted, exhausted world.” Saramago’s intent is not only to fulfill the “blind leading the blind” parable but also to suggest that sight, untended to and poorly directed, can be a kind of self-inflicted blindness. When the doctor and his wife (who can see) escape the asylum they come upon hundreds of blind folk, “who entertained themselves by listening to speeches from other blind people” about justice, taxation, the court system, prostitution, and so on. To the doctor, “neither group seemed to be blind.”

The symmetry is more alarming than absurd. Saramago concludes “there are no blind people, only blindness.” His underlying query, however, is another: when indifference and malice exist on a mass scale what is the purpose of sight? What is the meaning of vision if we hamper it? And don’t expect a Communist to kneel before a Christian God, “who does not deserve to see.”