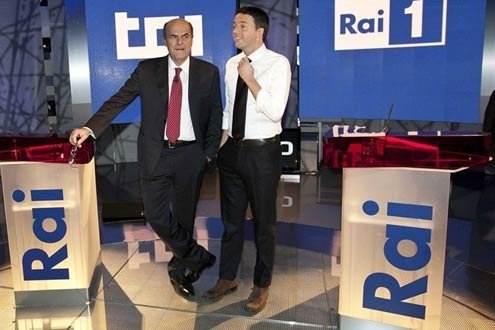 ew Italians know the details of their constitution. Italy’s father figure president and national intellectuals mention it from time to time but its relevance to the Italian social narrative and pop culture is negligible. Far sexier is the American version, whose dogma Hollywood and the web have stitched into the global mindset. Snippets of constitutional Americana are available everywhere, and Italy has long liked miming a side of U.S. life that mass media sells as fair and egalitarian, if not iCool.

But mimicry can overlap caricature, and Italy’s undercooked imitation of American political primaries is a good example.

The copycat impetus began with the end of the Cold War, which closed out European communism and encouraged Italian political parties to forage for progressive examples. American political protocols were Johnny-on-the-spot, all the more so after jingoistic U.S. cable media went global in the 1990s.

In 2001, forty-something former Rome Mayor Francesco Rutelli tried morphing into a desirable center-left Italian amalgam of John Kennedy and Bill Clinton. He was mocked and steamrolled by populist Silvio Berlusconi. Seven years later, Walter Veltroni, another center-left figure and also a former Rome mayor, sang weekly praises of Barack Obama as if to create a melodic bond between his Democratic Party and the American Democrats of the time. Veltroni did little better than Rutelli, with Berlusconi winning again.

But Veltroni insisted that Italy embrace and maintain some form of the American primary system, hoping it might herald more sweeping electoral changes (it hasn’t). He won control of the party in 2007 following an “open” primary that often seemed closer to a plebiscite.

Unlike the U.S., parliamentary-system Italy lacks legislation outlining how a primary should work. There is no delegate system. Parties admit candidates from their ranks, different in spirit from how it plays out across the ocean. Under the American direct vote system, any wannabe underdog with cash to spare can enter a presidential primary, whose rules are governed by the state in which they’re held. Such an underdog works toward an upset that might open the door to national exposure and credibility. Obama was just such an outsider in the early going.

The more contrived Italian primaries are more like party caucuses, in-house competitions in which available candidates are pre-determined before they’re made available to public choice. The Democratic Party’s just-concluded first round of primary voting saw six candidates vie for party leadership, with two of them, incumbent party leader Pier Luigi Bersani and upstart Florence Mayor Matteo Renzi, finishing first and second, respectively, and pushed into a two-man runoff that Bersani won handily.

Yet Bersani and Renzi were all but choreographed into battle, with dark horse, Tweet-wise Renzi, the gifted 37-year-old mayor of Florence, campaigning as an “insider outsider” with trend appeal. While American outsider candidacies are based on something like earned upheaval, with months of primaries playing to voter unpredictability, the Italian system pre-trims the fat by slowly settling on the contending players, tantamount to a U.S. party putting a group of aspiring national leaders to public consensus while monitoring the voting rules.

Democratic Party officials would no doubt argue their system is fairer the one employed by Berlusconi’s now-fractured People of Freedom Party, which reeks of paternalism. Its leader, Angelino Alfano, has vascillated over whether even to hold a primary should the aging Berlusconi decide on a comeback. The dirty old man is their dirty old man, or so it seems.

But in some respects the rigor of the old can seem in line with, or not much different from, the ambitions of the new, particularly when the new is only half-open and electoral reform still stuck on Italy’s backburner. What’s most appealing about American primaries is their celebration of the long haul, and the unpredictability built into the journey. The Italian process instead protects incumbency.

If Berlusconi’s arrogance is a political certainty, and a disturbing one, the Democratic Party’s primary knockoffs — along with mass media co-opting of American political verbs (endorsa for “endorse”) — look and feel like vendor-peddled Prada.

As the mainstream parties spar, agitprop entertainer Beppe Grillo and his 5-Stars movement, a barnstorming reformulation of the “just say no” wing of intellectual populism, is working to cast a distracting spell on the deeply disenchanted.

Italy’s Democrats see Bersani as an unsullied hack with strong blue-collar ties who can match up well both against Grillo, a political neophyte who tends toward burlesque hysteria, and Berlusconi, who despite age, scandals, and significantly diminished appeal can still emit a Rocky-style panache associated with those who won’t quit, let alone defer to better judgment.

But all the foreplay will mean nothing if March elections produce a substantive deadlock, as polls suggest they might. Such a stalemate would almost surely usher in a prolonging of the leadership of nonpartisan, non-elected incumbent Prime Minister Mario Monti, which might be as close to a good thing as faux-primary, horse-with-no-name Italy can get.