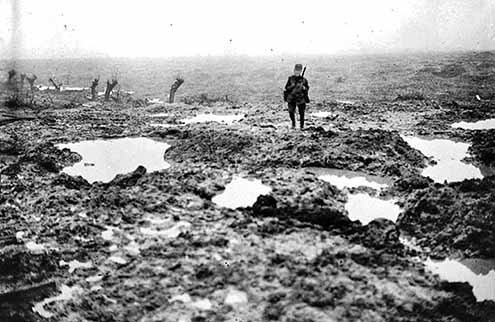 A railway bridge across the Meuse was demolished twice.
I

’m just back from a week driving around northern France, where a century ago — Oct. 26, 1916 — French troops recaptured Fort Douaumont to end the nine-month Battle of Verdun, World War I’s longest and deadliest battle. It began in February, when German troops attacked the ring of forts defending Verdun and the Meuse River.

An estimated 180,000 to 200,000 troops died in the fighting, but exact totals are impossible since artillery — the war’s most effective killer — vaporized, dismembered or buried many of the corpses.

The battle’s ground zero was the strategic Meuse, which flows north from central France and empties into the North Sea in Belgium. Hills and ridges flanking the river command appetizing vistas and access to the plains below, with Germany to the east and France to the west. The battle’s campaigns got its names from these hills: Hill 304, Morte Homme (Dead Man) and Vauquois.

The Meuse formed a transportation corridor that fed and armed the entire German front. Until the French took back Verdun, Germany controlled the corridor. The beleaguered French could rely only on single, two-lane road from Bar-le-Duc, which they dubbed the Voie Sacrée, the Sacred Road.

As the road’s name suggests, the Verdun faceoff was spiritual as well as a strategic and tactical for the French. Verdun’s fortifications had been built after the 19th-century Franco-Prussian war. In 1870, Germany defeated and humiliated France in at Sedan, an important railroad town straddling the Meuse. Then, in 1914, Germany embarrassed France yet again by adopting a strategy that bypassed the very forts the French had erected to stand up to a future German offensive.

For the French, Verdun was the battle for the homeland. Unlike their British, Commonwealth and American allies, the French were fighting for the sanctity of their own ground.

The Allies won the battle, and two years later the war, but the war left a deep regional stain.

Families needed surveyors to find houses flattened by artillery. Trees, crops and waterworks were reduced to toxic mud. Trenches scarred fields. Barbed wire kept owners from reaching their land and French authorities barred them from entering buildings. The damage was color-coded. Red zones were off limits, polluted by human and animal corpses and tangles of wire. Wrecked cannons, tanks and poison gas canisters were all around.

In all, 70 percent of Meuse region towns were damaged. Dozens were abandoned and some rebuilt elsewhere. Many refugees made new lives while away. Others, including deportees to German factories and prison camps, found rebuilding too hard and sought new homes with fewer bad memories.

Those who returned to Verdun — which had an immense red zone — filled in trenches and did what they could to rebuild. Handsome stone farmhouses, plowed fields and tractor-traveled roads belie the wartime scene, when the same land swarmed with hundreds of thousands of men, horses and vehicles. Tour buses at war sites and restaurants with tourist menus suggest a perversely new kind of war economy.

Yet the Meuse region is among France’s poorest and most depopulated. Locals say the war’s deepest scars are invisible. Everyday activities such as plowing or construction turn up hundreds of tons of dormant explosives still dangerous even after a century underground. Heavy metals taint the topsoil as deep as four meters and may take centuries to degrade.

Some say the war all but sank the region, but that’s not the only view. Population was already declining before the hostilities, says a local lawyer and activist. And postwar government subsidies only encouraged exaggeration and victimhood.

But no visitor to this part of France can escape the war. Milestones capped with French helmets line both sides of the Voie Sacrée. Every town has a war monument and most look alike — they were mass-produced. The American First Division, Infantry Engineers and 2nd Division planted monuments wherever they stopped.

This isn’t bucolic Provence with its lavender-covered hills and sun. It isn’t postcard perfect Paris. It isn’t even the overpopulated and fermenting banlieues, the country’s urban slums. In village after village, empty shop windows and “for sale” signs are commerce’s version of shell-shocked soldiers’ “thousand-yard stare.” There are more cemeteries than gas stations. The Allied graveyards are vast, with white crosses and stars of David. The German ones are more modest, with black crosses and stars.

Nature is also a witness. In the woods are shell holes and trenches that no one bothered to fill in. Among oaks and beeches are Norway pines, fast-growing, non-native trees planted after the war.

When it became too much to bear, I retreated to my sterile motel. One cold fall morning I walked my dog on the old towpath by the Meuse. Ahead of us, the arch to nowhere of a shattered railroad bridge loomed out of the mist. Motel clerks told me the bridge was torn down in 1914 to block the German advance. Locals rebuilt it only to tear it down again in 1940 for the same reason. Now, in a land of cemeteries, rebuilding no longer makes sense.