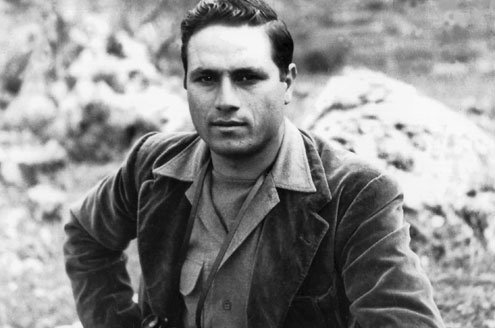 Salvatore Giuliano near his hometown of Montelepre in August 1947. He died that year at 27.
M

ore than two dozen well-known bandits terrorized postwar Sicily, but only Salvatore Giuliano possessed the perfect combination of ambition, swagger, good looks, and ruthlessness that befit a living legend. Dubbed the Sicilian Robin Hood because he robbed from the rich and shared his spoils with the poor, Giuliano — nicknamed “Turiddu” — led a seven-year enterprise of kidnapping, extortion and murder that claimed the lives of more than 100 Italian lawmen.

The chaos, lawlessness and poverty that followed the Allied Invasion of Sicily in the summer of 1943 presented the ideal conditions for the rise of Giuliano. Without an effective government to implement food rationing, 70 percent of the island’s food supply fell into the hands of the black market. That September, two Carabinieri stopped Giuliano at a police checkpoint while trafficking wheat on his mule. Details are sketchy, but Giuliano apparently tried to flee. When he was shot and wounded he pulled a gun from sock and fired back, killing one officer and wounding the other.

The 20-year-old son of a farmer from Montelpre, near Palermo, Giuliano was shot twice in the gunfight but managed to escape. He hid out at his parents’ house until Christmas Eve, when he assassinated another officer during a dragnet hell-bent on capturing him. Giuliano fled to the scorched mountains above Montelpre, where he reigned as Sicily’s sovereign outlaw for the rest of his short, bloody life.

Giuliano soon formed a small band of loyal marauders, equipping them with the guns, grenades, and ammunition, all of which littered Sicily after the hasty retreat of the Germans and Mussolini’s Fascists. Gang members robbed, extorted and kidnapped the rich, all while assassinating police officials indiscriminately.

Civilians were killed mostly for swindling and betrayal. Giuliano shot a local post-master for stealing money from envelopes sent by mail from their relatives in America. He also murdered another outlaw for misrepresenting him. “Giuliano does not rob the poor,” he clarified in a note pinned to the latter’s chest.

But the flamboyant desperado often treated the victims of lesser crimes with respect. During a break-in at the home of the Duchess of Pratameno, Giuliano took John Steinbeck’s book “In Dubious Battle,” which he promptly returned with a thank you note. He chatted openly with kidnapping victims, and accommodated their food and book requests. Many later recalled their time with him fondly.

Giuliano gave away large portions of his kidnapping ransoms to the peasantry, securing the protection, loyalty and silence intrinsic to the Sicilian code of omertà. He paid 10 times the going rate for supplies and gave generous sums to informants who reported on the activities of his enemies or police. While the Italian government neglected Sicily’s glaring poverty, Giuliano furnished money, food and medicine for the poor. Despite police harassment and even arrest, townspeople protected benefactor Giuliano like a proud, native son.

In 1945, Giuliano’s enormous popularity and brazen cop killing — he brandished a Thompson machine gun — caught the attention of the Mafia-backed Movimento Indipendenza Siciliano (Movement for Sicilian Independence). The MIS, which resented the way the Rome government neglected Sicily and denied it independence, enlisted Giuliano to sway election votes among locals. He was made a “colonel” in EVIS, the military arm of the MIS. By December, Giuliano was leading dozens of recruits across the countryside attacking Carabinieri outposts.

Sicily was placed under martial law for more than four months as Interior Minister Pier Luigi Romita offered an 800,000 lire reward for Giuliano, who countered with a two million lire bounty for Romita. Hundreds of police and military units were deployed in the hunt but found themselves overmatched and withdrew. Giuliano’s crusade, widely covered by the international press, catapulted him to infamy.

The beginning of Giuliano’s end came in 1947 after the Portella della Ginestra massacre. Eleven people were killed, including four children, and 27 injured, when Giuliano and his men opened fire from the hills into a crowd of thousands of peasants celebrating May Day. Giuliano, whose success and reputation rested on his relationship with the impoverished, insisted the bloodbath was unintentional, saying the real target was Girolamo Li Causi, the anti-independence head of Sicily’s Communist Party.

Several prominent Mafia politicians promised Giuliano a full pardon if he agreed to participate in another MIS campaign in 1948. He agreed, and delivered massive results. But new Interior Minister Mario Scelba denied his pardon, instead dispatching Carabinieri colonel and former military intelligence officer Ugo Luca to hunt down Giuliano. Fearing intrusive police scrutiny, the same Mafia who had courted Giuliano now worked with Luca to take him down.

On July 5, 1949, Giuliano, whose life is immortalized in Francesco Rosi’s acclaimed 1964 film “Giuliano Salvatore,” and Mario Puzo’s novel “The Sicilian,” was murdered in his sleep by his trusted right hand man, Gaspare Pisciotta, who had turned police informant. Once Pisciotta was spirited away, police lugged the 27-year-old Giuliano’s body into a courtyard, posed him with a gun, and pumped him full of bullets. Until the squalid truth came out, the staged shootout made it appear that the Sicilian Robin Hood had gone down in a spectacular blaze of glory.