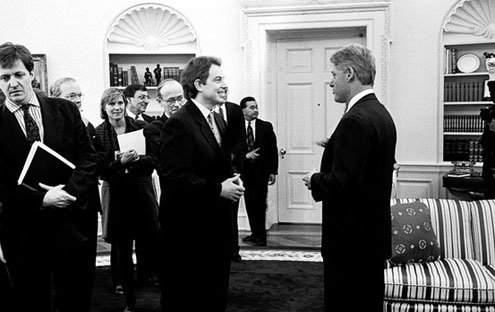 Blair’s accounting interknits fact with self-justification, which is the nature of autobiography. But even given his fault lines, the man is streets ahead of the current field.

On both counts, he divulges insider details. In the process, his urge to polish his own image has blindsided him. Because some of these factual accounts certainly disclose more than he could have possibly intended. Such sneak, insider peeks are among the many surprises that make “A Journey” so deeply intriguing.

Other surprises are more disturbing. Blair’s basic politics were always linked to his conviction that Britain had “a long-term partnership with America.” He had first-name ties with both American presidents in his sitting term, first “Bill,” then “George.” The book’s U.S. public may at first be flattered by this attention. But 691 pages later they may find themselves perplexed by the author’s geographically-imprisoned mindset.

So it’s easy to imagine the book’s shock potential for those third mil readers whose many citizenships and allegiances straddle national borders, even continents. For such citizens, Blair’s account is truly puzzling. Too many countries missing from the global analysis.

Focused on portraying himself as one of the top figures in the Western Major Leagues, he tends to ignore less powerful players. This seriously limits his reporting skills. He’s best when tracking his private PM triumphs, of which there were many.

He’s dead-on when he analyzes “his” decade, the 1990s, and the great left-right-center shuffles within Western political parties. Red and black banners lost much of their popular followings. Both left and right were busy shedding past particles and moving to consolidate a larger, more centrist base. In recognizing this general trend, and his own role in reconfiguring Britain’s Labour Party to “New Labour,” Blair is tireless in comparing himself to Bill Clinton. “As fellow third-way progressives, Bill and I had a natural bond.” (Blair’s mind does not runneth- over with modesty.) “A Journey” is richly layered with photos of them together.

His other favorite photo-op companion was George W. Bush. Together, they spent years debating how to “get rid of Saddam Hussein, and free Iraq for democracy.” Blair’s running account of this unveils more than he seems to realize. For he and George had been debating Iraq, and attack alternatives on that country, long before 9/ll. Reflecting on the Iraq run-up and subsequent political debacle, Blair concludes: “We were in error (on Hussein’s WMD), but not in bad faith.” Really? Given the pre 9/11 planning? So was Britain’s PM the only politico in the Western Hemisphere and beyond who didn’t know of the Bush family’s long-standing brokerage of Iraq oil deals? Since he is many things — but never stupid — you have to assume he believes the reader is.

In living his decade, he made other unfortunate assumptions. One was that nation states become interesting only if they provide significant political/military/PR support for Brit-U.S. politics. Unhelpful or powerless countries get short shrift.

This reviewer has both American and Italian citizenship, so where was Italy during Blair’s term? (And Spain? Portugal? Hungary?…). None indexed.

Hunting with due diligence — and imagination — you can find Italy under the entry covering Blair’s vacation journeys. He likes Italy’s nobility, and the generous hospitality in their countryside Villas.

On to Silvio Berlusconi. The PM greatly wanted Britain to win the 2012 Olympics bid. During Blair’s personal calls to Italy, the Italian leader assures: “You are my friend… I see if I can help.”

And he did. And immediately joined the first-name club as Silvio.

The sum? “A Journey” is rich archive of a pivotal period in recent history. It also reveals how thoroughly the author calculated power, and how to put it to personal use.