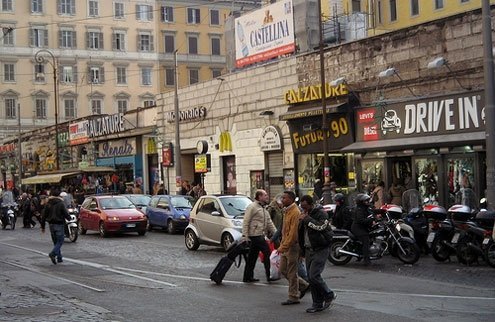 Via Giolitti: No rule by prime minister...
V

ia Giovanni Giolitti flanks Rome’s central station north-to-south. It’s named after an early Italian prime minister who preferred fascism to the rising tide of violent unionism. When Benito Mussolini ragtag army marched on Rome in 1922, the semi-retired Giolitti was vacationing in France. Anyone but the Reds, he reasoned. He wasn’t alone. By the time Giolitti changed his mind Mussolini wasn’t taking orders.

These days, graffiti-chafed Via Giolitti’s has a “Blade Runner” feel — after Ridley Scott’s 1985 noir fable set in a dilapidated and futuristic Los Angeles where street life is feral and malodorous.

But the Via Giolitti of 2010 is also a sociologist’s paradise. It’s the urban anti-Rome on cue, a crowded portrait of an unforgiving inner city that’s getting larger by the year.

In the final decade of the century, Rome used its hosting of the World Cup and the Catholic Jubilee year 2000 to redecorate some of its more crippled parts. Vatican money backed extensive artistic restoration while a spend-crazy city hall (under Mayor Francesco Rutelli; later routed by Silvio Berlusconi in his bid for national leadership) redid facades and museums, widened streets, and generally applied pancake makeup to inner city eyesores.

Flower-sellers were no longer legions of gypsies, as they’d been for decades, but armadas of brother-can-you-spare-a-dime Bangladeshis; street vendors — once mocked “vucompras” — morphed into ubiquitous shell-gamers with their own hierarchy, bureaucracy and security mechanisms.

Rome’s quietly growing Chinese population seized on the San Francisco example, building networks of restaurants that linked legal and illegal communities. There are now some 200 Chinese restaurants in the city.

Threatening new arrivals with fines and deportation didn’t work. Most African and Asian immigrants were too far from home, and their origins too humble, to fear such sanctions. They flaunted police, who, outmanned, backed off. But for some, government amnesties came too late; they’re too deeply embedded in parallel life. As a result, the official battleground has gone offshore, with efforts focused on near-futile dike building.

More established immigrant middlemen have replaced Italians in monitoring and managing the city’s underworld. As a result, places such as Via Giolitti are unapologetically brazen. Though life in American bus depot districts took on folksy status thanks to Edward Hopper and Jack Kerouac, the truth of human passage is stench, a constant in almost all European train stations.

On a winter day at twilight, Via Giolitti is a bunk for commerce and self-perpetuating decay. Cars by the thousands feed the raw boulevard from the Tangenziale Est, which thrusts traffic from the city’s most densely populated working class neighborhoods into the city center. Fleabag hotels both modern and brittle line up like prostitutes, who also make their rounds.

On the station side, cabs idle at taxi stands, their drivers smoking in repose, bewildered tourists seeking relief from the snarl, or at least safe passage. The indolent drivers instead bark or gesture at the station front, half-a-kilometer away. They’re off shift. Many newer cabbies are native Spanish speakers — Peruvians or Cape Verde islanders — who depend on GPS for directions. Rogue drivers hunt fares on the outskirts of the smokers. Interestingly, there are still no black faces, at least not among drivers.

Across the street from the station hubbub are Chinese restaurants decked out in dull L.A. neon. Outside them, hordes of Senegalese vendors, lanky, serrated men, congregate, eat, smoke, their bags of knockoffs at rest beside them. The whole strip is heavy on cheap shoe stores, electronic shops, fast food outlets, and single-slice pizza joints, with cars, vans and motorbikes parked three rows deep on their fringes. The scene looks nothing at all like “Bicycle Thief” Rome, since neo-realism was very much an all-Italian affair, or that of “Roman Holiday,” tailored instead only American foreigners with sugarplum visions of an Eternal City. By Via Giolitti’s February light, few are the remnants of the Peck-Hepburn mood that hitched coarse but luscious postwar Italy to the global imagination.

Though Rome assigns a fair share of beat cops to the station and local Metro stops (Termini, Vittorio Emanuele and Porta Maggiore), the outlaw sprawl inevitably overflows containment. Via Giolitti and the multiethnic neighborhoods around it are percolating sub-city whose emphatic existence gives Italian political racism both its credibility and, crime-wise, its ammunition.

Ironically, however, even the racism is outdated, based on the notion that Italy could legislate its makeup. It can’t. Despite its typically rough edge, Via Giolitti presages not only a multiracial Italy but also eventually a multiracial middle class.

For now, however, much of the immigrant world kowtows to a feudal side. Arrivals, both men and women, are serfs for second-generation ethnic gang bosses who have a near-institutional grip on the netherworlds of central Italy, particularly Rome and Naples. The Mafia and Camorra rely increasingly on non-Italian agents and enforcers. The Italo-Sicilian gangster — “The Godfather” series its clichéd heyday — no longer dines on pasta and clams; Ethiopian and Moroccan clan bosses have their own preferences.

In a remarkable and telling indictment, Italy’s state audit court recently resorted to virology in an effort to contextualize the country’s ongoing criminal epidemic. Too often, the court said, pathological corruption was met with no immune response. In essence, the antibodies of the body Italy failed to recognize assassins, in this case rule-breakers, seeing them instead as part of its body mass, the body politic, the whole.

Via Giolitti certainly won’t brook antibodies. It coaxes a vivid virus along its whole length. Those pre-wired to see Rome in terms of Dolce Vita and Eternal City clichés might be wise to dedicate a few minutes to a 6 p.m. stroll near the station. Untended rot is the most vibrant harbinger the planet has to offer, and sometimes ironically the most hopeful. It’s always open. There’s never a strike. On a street named after a prime minister, the real prime minister is meaningless.