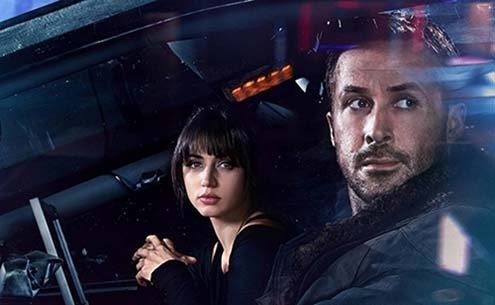 doggedly tracks down a burly snail farmer to his 1950s-era farmhouse in a landscape bereft of vegetation. As K points his weapon at the farmer, a replicant he’s been ordered to kill, the farmer asks: “How does it feel to kill your own kind?”

That question of “kind,” raised in this opening face-off between the two replicants, who are anthropomorphic, artificially intelligent robots, is the salient question behind both “Blade Runner 2049” and its iconic predecessor, “Blade Runner” (1982).

Director Denis Villenueve (“Arrival”), producer Ridley Scott and writer Hampton Fancher (respectively director and writer the first time around) ground this film in their 1982 original. Set in 2019, that story followed detective Rick Deckard (Harrison Ford), whose job as an LAPD Blade Runner was to track old replicants, who come from other planets to threaten earth. An open question was whether Deckard was replicant or human. The new Blade Runner (Ryan Gosling) seems to be clearly a replicant, hence the question about killing his own kind. But like most replicants in “Blade Runner 2049,” his human qualities challenge the binary world.

K’s search is not for any rogue replicant, as was Deckard’s, but for the child-now-adult who may have been fathered by Deckard and his replicant girlfriend in 2019. The concept of a child produced by a replicant is an existential threat to humans, says Dr. Joshi, the less-than-human-like human lieutenant (Robin Wright) who directs K and others in their task to eliminate fellow replicants gone rogue. The child is also a source of hope and possibility for K and other replicants who might themselves be part human. “We all want to be the child,” says one.

It’s not just a human/replicant world that’s presented, but also one filled with virtual reality. A gorgeous digital woman (Ana de Armas) emerges from an apartment to feel rain. As she runs her hands on her wet, lustrous skin, her joy is palpable. Her name is “Joi,” and she is “only” digital (as in the film “Her,” though here she has form). When K finds pleasure in his digital enjoyment of his faux girlfriend’s digitally-produced physical sensation, the layers of reality are starkly exposed.

These layers pose the question about what it means to be human and give the film dense meaning. The evil human genius who creates replicants, now blind Niander Wallace (Jared Leto), debates with his equally repugnant replicant side-kick (an excellent Sylvia Hoeks) what or who can be made a slave. If replicants can mate with humans, can reproduce, or can seem to have souls, then might empathy preclude enslavement? If one thinks of “kinds” (blacks? immigrants? Puerto Ricans? North Koreans?) as less than fully human, can one enslave them, kill them or let them die without remorse? The movie’s 2049 Dickensian workhouse full of presumably replicant children is a striking portrayal of mass slavery.

As in the original, the setting of “Blade Runner 2049” is primarily a dystopian greater Los Angeles, with the city even less recognizable in 2049 than it was in 2019, and the film’s geographic scope is greater. Now San Diego is featured too – as a vast waste disposal site. The horrors of ecological damage are front and center in “Blade Runner 2049” as they were in the first film. The haze of pollution and the effects of extreme storms and climate changes give the landscape its unsettling eerie qualities. The look of the film, superbly created by the masterful Roger Deakins (“Skyfall,” “Sicario”), makes it a stunning visual experience.

Selecting Ryan Gosling to replace Harrison Ford as the Blade Runner was not an obvious choice. Both are leading, romantic men: Gosling a heartthrob and more anodyne; Ford more, yes, human and ironic. Compared to Ford’s craggy, smirking film persona, Gosling is a graceful, blank slate. The younger actor is the right “type” to illustrate an increasingly computerized world, in which robots and digital persons and humans are more entwined than in 2019 — as perceived in 1982. Credit Scott and Villeneuve for developing a new lead a different approach.

In 1982 “Blade Runner” opened to lukewarm reviews and fared poorly at the box office. Over time, it gained status as one of the best films of the 20th century. “Blade Runner 2049” opened to high praise but (again) modest box office earnings. Both are action movies featuring high-speed, high-density science fiction at their core. But they also probe metaphysical questions at a level rarely seen in the action genre. That might explain the initial audience lack of enthusiasm for the two films.