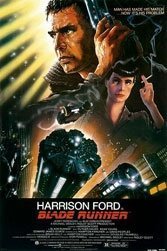 Industrial Light and Magic was Thomas Edison to the sci-fi universe. Suddenly it shone. Brightly at first. Space was fun, so was the vision of future cities. Then came Ridley Scott, lugging molecules of Phillip K. Dick, Dashiell Hammett, Fritz Lang and George Orwell in a big wet sack.

What “Blade Runner” is about — a melancholy detective named Deckard (Harrison Ford) hunting down illegal human replacements — matters less than the stink of its urban sphere: rained out, washed out, a 21st-century Chinatown presented as a claustrophobic shanty. It’s the future as a worn-out trench coat.

The storyline is all Continental Op. Retired cop Deckard, unsmiling and bored, is unceremoniously unretired to chase down a lethal gang of so-called replicants, genetically engineered robots created to help the race on its colonial planets but unwanted at home. Deckard is a longtime replicant sleuth (known as Blade Runners) who grew tired of the grind but has skeletons in his closet. He returns under duress after six replicants get loose, apparently eager to get back at their maker, Eldon Tyrell (Joe Turkel), a corporate Mengele.

The replicant leader is Roy Batty (Rutger Hauer), the alien Aryan supreme. The deliberate cat-and-mouse between Deckard and Batty’s gang is played out in weird light of a dripping anti-city populated not so much by people as lurches of fantasy. There’s J.F. Sebastian (William Sanderson), a good-hearted genetic genius who makes midgets and behaves like a child; Gaff (Edward James Olmos), a one-man, multiethnic Tower of Babel who drifts between enforcer and mercenary; Rachel (Sean Young), a state-of-the-art replicant who has memories and the “aptitude” to love; she also woos Deckard.

But any message in Scott’s movie is secondary to its bleakly awing imagery. His Metropolis is no place for humans, which is part of the point. Old bromides stand out: Corporations are venal, cities are sunless cesspools, cops are corrupt, pleasure can be manufactured and is fickle, and brains and brawn don’t assure you of knowing who you really are. Is replicant hunter Deckart himself a replicant? You be the judge. Scott’s original version left the matter unresolved.

In 2008, the American Film Institute the movie as the sixth best sci-film ever, just behind “The Day the Earth Stood Still” and ahead of Scott’s own “Alien.” The list was worthily headed by Stanley Kubrick’s “2001: A Space Odyssey.”