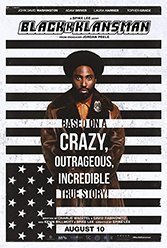 Director Spike Lee brings his narrative genius to the true story of rookie black cop Ron Stallworth (John David Washington), who with a white surrogate infiltrated the Ku Klux Klan in Colorado in the 1970s. Although Lee cannot resist being didactic, he tempers this impulse in small ways, while the point of the film is writ large.

Based on Stallworth’s 2014 book, “BlacKkKlansman” opens with Alec Baldwin as a fictitious white Southern bigot filming a racist infomercial. He resembles Bull Connor, who turned police attack dogs on Alabama protestors in the 1960s, although the audience is more likely to conjure Donald Trump, whom Baldwin has often impersonated. The film ends with real footage of the 2017 murder – by an alt-right supporter — of a protestor in Charlottesville, Virginia. Between these bookends is the nerve-wracking story — as those of undercover agents usually are — of a white cop (Flip Zimmerman, played credibly by low-affect Adam Driver), standing in for the black cop who by phone joins the KKK. David Duke (Topher Grace) comes across as an earnest and naïve ideologue, and the Colorado Springs KKKers can seem like a sinister version of the Keystone Kops: one is paranoid, another an overweight drunk, a third functions as the rational organizer.

Lee highlights the drama by cross-cutting between Harry Belafonte as Jerome Turner, narrating the 1916 lynching of Jesse Washington, and the KKKers gleefully watching D.W. Griffith’s racist classic, “The Birth of a Nation” (1915). Both scenes end with raised arm salutes — the Nazi salute for the KKKers, black power for Belafonte’s audience. Look for an ingenious use of Blacksploitation films as well, including a Pam Grier-like sequence, guns drawn.

In several tense scenes in which the most suspicious of the Klan members accuses Zimmerman of being Jewish, Lee reminds us that the KKK is as anti-Semitic as it is racist.

Unlike Lee’s masterpiece, “Do the Right Thing,” there’s little subtlety in this film, but lots of entertainment — including more than a little humor — and messaging.