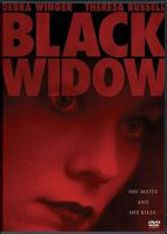 Seeing Theresa Russell and Debra Winger in top form is an ageless treat. “Black Widow” is a pulpy 1930s genre film catapulted forward half-a-century: unscrupulous vixen (Russell) vs. wholesome investigator (Winger). Director Bob Rafelson knew he had a good thing and played it shamelessly. Catherine Peterson (Russell) seduces older men for their money and dares prissy Alex Barnes (Winger) to nail her. Dennis Hopper and Nicol Williamson, two rather potent veterans, are pushed to the sidelines because Russell (along with Ellen Barkin) has Hollywood vamp in her DNA. The off-the-charts erotic static between Russell and Winger would fry most men in 60 seconds. Never mind that this is only a modestly successful movie, see it for women who don’t need men.