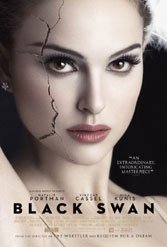 “Black Swan” is Natalie Portman’s elegy. If once she flocked to overrated roles (Zach Braff’s 2004 “Garden State” was quirky disaster), no longer. Preparation for strand-thin ballerina Nina Sayers was as self-denying as the character: rigorous exercise and a near-starvation diet.

But Portman’s emaciated body alone is not what makes this film, with its vast tiers of darkness, a breathtaking detour from director Aronofsky’s past works (“Pi,” “Reqiuem for a Dream,” “The Wrestler”). His antiheroes have always been men. Here instead is cutting treatise on women’s bodies, controlled and villified in the names of sex and art.

Nina, a virginal slip of a girl with sweet demeanor and perfectionist’s restraint, destroys her body to please others. Portman nails the look. Every plié and fouetté brings grimace. She’s also bulimic, eating scarcely enough for the ritual purge.

Nina’s discipline fails to satisfy Manhattan ballet director Thomas Leroy (Vincent Cassel), who seeks both Madonna and whore to embody the stainless and the sensuous, the white and the black, of “Swan Lake” lore. But Nina is pure White Swan. She with a suffocating mother (Barbara Hershey) in a New York fortress of dolls and pink. Life has made her movements nimble, but hard. Determined to get under her skin and impressed after she bites off his unwelcome sexual advance, Thomas still picks Nina for the role of Swan Queen, hoping to coax out the duplicitous prima ballerina within. To master the Black Swan’s seduction, he suggests she go home and “touch” herself.

While Nina struggles, new arrival Lily (Mila Kunis) looks Black Swan incarnate, with a cliché tattoo (black wings) to prove it. Other hints aren’t as overt. She is confident and effortless (told by Thomas to, “Go warm up” before an audition, she smiles: “No thanks, I’ve got it”). Sexually unhampered, Lily injects herself syringe-like into Nina. So commences the frightening psychotropic pivot between Nina’s reality and fantasy. A woman probing her inner Black Swan, her carnal awakening, can be a beautiful sight. But Aronofsky’s take is bleak.

It’s been more than half a century since anyone attempted the ballet tragedy (see 1948’s sublime “The Red Shoes”), but “Black Swan” makes a graceful entrance. Even the camerawork, like a good little ballerina, is light on its feet. See it for Portman’s Oscar-worthy performance if nothing else.