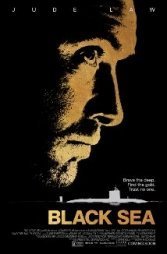 Imagine a bank heist in which the thieves hatch a devious plan only to find themselves trapped underground inches from the vault. Now, add a submarine, lost gold, avaricious mercenaries, and every manner of underwater claustrophobia. Director Kevin Mcdonald’s conventional and ultimately farcical thriller borrows from World War II-era submarine dramas and doomed robber tales, hoping conflict and chaos can overcome shortfalls in plot and character development. They don’t.

Robinson (Jude Law) is a sub captain unceremoniously laid off by his marine salvage firm. A former mate tells him of the legend of a Nazi U-Boat laden with gobs of gold, and Robinson sells the idea of salvaging the gold to a laconic mogul. Next comes purchasing a decrepit Russian sub in Sebastopol and making for the Black Sea. Once on board, blue-collar Brits quarrel with blue-collar Russians (ah, greed), and all manner of testosterone mayhem ensues. Not enough of it, of course, to prevent the fortune-seekers from eying their prize.

Just when all seems lost comes an endgame twist, inducing the embittered but family-loving Robison to brogue, “I’m not going home poor.” If only he just took the money and ran. Instead, McDonald indulges 30 muddled minutes of man-eat-man absurdity that literally drowns any remaining vestiges of cinematic good will. It’s anyone’s guess why the Glasgow-born Mcdonald (“The Last King of Scotland,” “State of Play”) dove into these messy waters. “Either it’s going to work or it’s not,” says a gnarled Russian of a makeshift repair. This doesn’t.