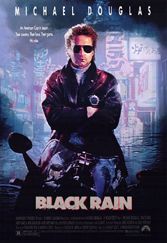 Two surefooted New York City cops plunge into a Yazuka gang wars in New York City but lose their footing when ordered to escort one of the detainees back to Tokyo. Nick (Michael Douglas) is insubordinate and reckless. Partner Charlie (Andy Garcia) reins him in with limited success. Douglas and Garcia have great symphonic grins; like two adult boys. To kick-start his story, director Ridley Scott decides to kill off Charlie. This makes Nick red-blooded mad. But being livid in Tokyo doesn’t carry the same weight as in The Apple. So long as Scott lets culture shock hold sway, the movie has a quivering, feckless side. Nick gets involved with American escort Joyce (Kate Capshaw) who gives him the lowdown on Japanese gamesmanship. The rest is all fore- and gunplay. Visually, Scott’s dank and sultry Tokyo looks like “Blade Runner” territory.