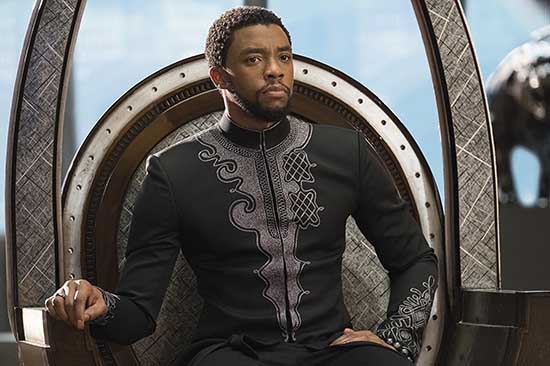 he blockbuster “Black Panther” is both a classic super-hero movie (not meant as a compliment), and an immersion into black thought and culture. It breathes new life into Afrofuturism, a term coined in the 1990s to describe the use of science fiction to imagine a prosperous, progressive future for Africa and the African diaspora.

The Marvel comics franchise gave film audiences the T’Challa/Black Panther character, conceived in the late 1960s and recently featured in “Captain America: Civil War” (2016). He’s played by Chadwick Boseman, an experienced biopic actor (title roles in “42” [2013] as Jackie Robinson and “Marshall” [2017] as Thurgood Marshall), though not particularly well-known. In the Panther’s own film, he — and his world — take center stage, as do the protagonist and her world in 2016’s “Wonder Woman.”

Both these Marvel comic offerings present a hidden, idyllic, closed society: in “Wonder Woman,” Amazonia, in “Black Panther,” the African kingdom of Wakanda. Both societies depend on secrecy to protect them from First World rapaciousness; the Amazons keep out men, Wakanda keeps out the West. In Wakanda, agrarianism and a personal petty capitalism stand in for civility and morality, existing alongside a city of skyscrapers and high technology, all of it supported by the nation’s unique access to the element vibranium (akin to the Saudis’ reliance on oil).

Director and writer Ryan Coogler wants his imagined Africa to be recognized as the equivalent of, even superior to, the West. He accomplishes his goal in part by celebrating tribal Africa and, paradoxically, pan-Africanism. At the same time that the highly developed, wealthy, sophisticated ancient West African empires of Ghana, Mali and Songhai (collectively the 8th through the 16th century), it highlights the dress and attributes of specific tribes, from Tuareg jewelry (Algeria/Mali/Niger) to Kente cloth (Ghana) to the lip plates of the Mursi (Ethiopia). Costume and production designers Ruth Carter and Hannah Bleacher, respectively, who deserve credit for a good deal of the film’s visual appeal, take designs often derided as “primitive” and make them glorious and relevant.

Then there’s the plot, much of it standard super-hero fare.​ Yes, women warriors are involved — and they are fascinating and gorgeous and shatter stereotypes. An emblematic James Bond-like scene unfolds in a South Korean casino, where Danai Gurira, who plays the head of T’Challa’s all-woman royal guard, throws off a wig she’s wearing to disguise herself, calling it “a disgrace”; her natural state is majestically bald. But the fight scenes are what one can expect from CGI these days, and a key one, that takes place on the underground tracks of a sleek Wakanda super-high-speed inter-city train system (better than any in the West), is too obscurely filmed to figure out who is winning; unfortunately that’s become standard movie fare.

More interesting is the story line that dispenses with the bad white guy early on, leaving one peripheral white CIA agent to channel his Han Solo. The film instead uses only black characters to present the varieties of moral choice. As king of Wakanda, T’Challa is faced with the dilemma of whether or not to help the millions of black people who are downtrodden and abused by the dominant white society, and if so, how. Does Wakanda remain isolated and protected and enjoy the benefits of isolation and wealth? Does it join the world by bringing in refugees? Does it take its riches to other places — in this case, Oakland, California (Coogler’s home town and the setting for his “Fruitvale Station” [2013], the true story of a young black man inexplicably killed by the police). Or does it employ its technology to achieve world dominance and thereby help blacks around the world? The characters opposed to T’Challa, powerfully portrayed by Michael B. Jordan as his Oakland relative and Daniel Kaluuya (“Get Out”), articulate militaristic options.

Two late scenes dramatize alternatives. In one, a rapt audience at the United Nations hears the King speak of breaking down walls (a reference to the sitting President of the United States), though it’s not yet clear he’s chosen that course for Wakanda. In the second, the King emerges from a hulking craft that has landed on an Oakland basketball court in the heart of the ghetto, captivating a black youngster while holding out the prospect of a revitalized community; Wakanda does urban renewal and the War on Poverty. That’s laying it on a bit thick, even for a Marvel comic.

“Black Panther” is both an ordinary and an extraordinary film. Its broad appeal suggests that’s a winning combination.