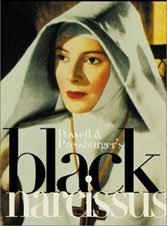 Lipstick was partly to blame. Unstable Sister Ruth (Kathleen Byron) lacquers the red stuff on with the unblushing showmanship of a devoted onanist. Then there’s Sister Clodagh (Deborah Kerr), too stern for rouged lips, but luscious even without. The inexperienced head of the new convent, she suffers haunting flashbacks to her romantic life before her Catholic vows (those scandalous scenes that were trimmed from American screenings).

Curse the only man around for Clodagh’s sudden confusion — and for lovesick Ruth’s jealousy. But Mr. Dean (David Farrar), a strapping if cynical British agent assigned to help the nuns, is spot on when he blames the indulgent Himalayan atmosphere instead. “There’s something in the air that makes everything seem exaggerated,” he bemoans. Clodagh can’t stand her defeat in that strange new land with its even stranger air, where sensuous, secular misadventures undermine even the most spiritual ambitions. Sensuality, after all, is the order of nature. And Clodagh’s nature is what she’s been running from all along.

Technicolor titillates the plot. When nubile nymphet Kanchi (Jean Simmons) arrives at the convent in search of guidance, the screen turns a shade of ambrosia. Ruth’s garnet hair and bloodshot eyes could make even vigorous viewers grow white-knuckle. The bountiful mountains and greenery are characters in their own right.

Though the first half of 20th century witnessed a rash of nun films, “Black Narcissus” outshines them all — and not only because it’s sexually pervasive. The film’s real gift is that it’s a horror flick in disguise. An unsettling early scene of Ruth, histrionic and blood splattered after a makeshift surgery attempt, foreshadows the violence to come.