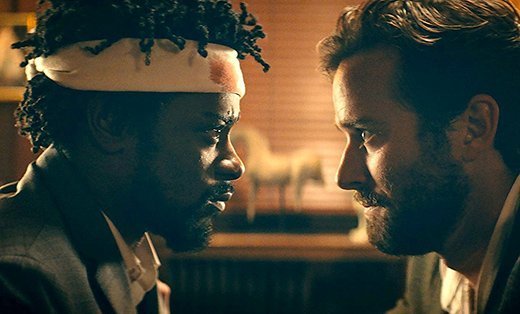 he film’s title is “Sorry to Bother You,” and that’s also the first line of the script that call center employees of the RegalView company are told to say when they get someone on the line. RegalView’s mantra is STTS —”stick to the script”— and the film’s protagonist, the appropriately named “Cash” (Cassius) Green (Lakeith Stanfield) dutifully conforms. He’s a young black man, eager to please and make a few bucks to pay his uncle for rent and a car. He doesn’t sell anything. Not, that is, until he takes the advice of an older black man (Danny Glover) in the next cubicle: “use your white voice.” Using a high-pitched, clipped speech that stands for white (David Cross provides the white voice Cash lip-syncs), Cash becomes a super-salesman, then a “power caller” (big money), a position requiring him to talk “white” when at the office, whether he’s on the phone or not. It’s not long before he slips into his white voice while at home with his black girlfriend.

To succeed as a black man you’ve got to act white: that’s one of the humiliations that mark this film. Another, with a very different message, occurs at a lavish sex-and-drugs party given by the CEO, Cash’s new boss, Steve Lift, at Workfree (the company for whom Cash now makes calls), played to earnest white-guy perfection by Armie Hammer. Lift insists that Cash perform rap for him and a bevy of party girls. Cash is no rapper, and discovers the best he can do is belt out the repeated word “niggershit”— to humiliating (and white) applause. Here Cash learns that a black man (even one who talks white) must play to black stereotypes; think Stepin Fetchit.

More humiliations involve the black body. One takes place on a television program called “Kick the Shit Out of Me” — let your imagination run with that one. In one of the film’s most enigmatic and depressing scenes, Cash’s girlfriend Detroit (Tessa Thompson) — a serious, avant-garde artist—courts bodily humiliation. At the opening of her art exhibition, she speaks “white” with a bit of a British accent while inviting the audience to throw cell phones and balloons filled with pig blood at her; they comply.

Yet another, bizarre humiliation brings the film into realm of science fiction; “Get Out!” meets “The Shape of Water.”

If “Sorry” is on the cutting edge of the contemporary black mindset, in other ways it’s a traditional film. Efforts to confront a rapacious capitalism by unionizing the RegalView call center bring to mind late-19th century confrontations between workers and the private Pinkerton police and the 1937 Battle of the Overpass, pitting the UAW against Ford Motor Company, as well as 20th-century films, including “Last Exit to Brooklyn” (1989) and “Norma Rae” (1979). Cash’s predicament — to become successful seems to require that he abandon his friends, his values, and his culture — is also standard Hollywood fare.

“Sorry” fills out a trilogy of black films that use Sci-Fi and outrageous tactics and values attributable to white folks to highlight the black experience in America. Along with “Get Out” and “The First Purge,” it begins with a sensible premise, adds a good measure of humor, then pulls no punches in portraying a black populace under attack. In that sense too, these films are in step with the #blacklivesmatter movement.

Boots Riley’s writing and directing are compelling; his film is engrossing and well-acted. Like “Black Panther” and “Fruitvale Station,” it’s set partly in Oakland, California, adding to its grittiness. Unlike “Black Panther,” it doesn’t have a particularly happy ending.