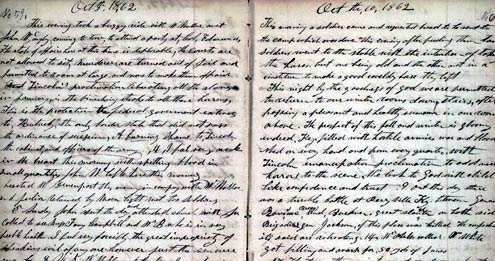 Well-crafted diaries were available to literature.
A

s an adult-in-training I was judiciously steered from using the first person. Putting raw sentiment ahead of conversant poise sabotaged good judgment. Journalism was particularly severe. Aside from column work, the “I” was taboo. The first person was reserved for massacres in which the writer was the only living witness.

Young writers learned to tamp down on the mercurial. Protocol applied even to letters to the editor: terseness, clarity, and economy were fundamental. Why waste three precious words, “In my opinion,” when opinion was by nature personal? Satisfying these hard-boiled rules didn’t entitle a letter’s publishing. Nothing did. I sent nine to The New York Times over two decades before finally seeing one in print, even then abridged. Rightly, I might add.

If fear of failure was cowing there was the diary. A private voice didn’t need an audience. Rumination was its own reward. Some diaries became literature because their authors out-wrote the constraints.

Since my upbringing, the antediluvian has yielded to an online ethos that openly mocks caution. In it, or on it, the first person is the only convincing persona. Feedback is immediacy’s stooge. Readers are smalltime celebrities instantly present in a romper room of hiccupping voices.

The paradigm-shift threatens television with obsolescence. The Internet’s courtship of feedback has produced a shantytown in which insight, muckraking and sensationalism co-exist arbitrarily. The political and the libidinal are generalized to arouse indistinctly but at will.

Feedback is journalism’s new frontier. Readers read what others post to re-supply bias or rationalize doubt. In the absence of context, teacup squabbles crop indiscriminately. The once-marginalized first person is now the beloved centerpiece of a kinetic medium contingent on semi-anonymous litigiousness. Modesty is the choice of the feeble; prudence is meaningless.

With McLuhan passé, the feedback, not the medium, is the message.

The beast’s greedy slouch has advocates among those who consider “input” and widespread-ness as ends of themselves. After all, global chatter is an insurance policy against elitism and tyranny. Harping on misgivings upsets democracy’s broadminded “don’t be a bore” mood.

But looking ahead to a society dominated by a collective first person vexes traditional notions of maturity — and the impending collision is alarming.

Adults-in-training are personality-driven to the exclusion of judgment, largely because judgment isn’t necessary. The rapid introduction of easy-to-access technology fosters an “I”-centric toy-land whose casual, distracted hordes mostly appreciate and applaud the easy. Being impressionable is fashionable; networking is an accomplishment, and busily combined the two stand in for general knowledge. The infantilizing of communication, mob rule by images, flash news and stunted sentences, generates a worldview prone to the latest, loudest, and the coolest. All is “historic” and “unprecedented” because it’s happening now. Choral corniness is the opiate of short attention spans. It’s predictable.

Those who ran my adult-in-training existence — parents, scoutmasters, editors, professors — slapped all excitement into context. How successfully I fit in depended on motivation, ethics, and the willingness to defend choices in word and deed. Experience made a narrative worth telling and a strong sense of self made that worth evident. Personal literacy was not the sum of any one transaction.

With the first person awarded traction a priori, metamorphosis is disoriented. Progress from where and toward what exactly? If a story shifts constantly, feedback added, video refreshed, game restarted, what then is the substance of its non-virtual objectives? What’s the moral? How does rigor fit in?

Speaking to Britain’s House of Lords of which she’s a member, Oxford neuroscientist Susan Greenfield recently warned about the effects of computer use on young attention spans. Most such warnings are trivialized for fear of disrespecting the postmodern. In a video game, bad outcomes are reversible, she said. “The emphasis is on the thrill of the moment, the buzz of rescuing the princess in the game. No care is given for the princess herself, for the content or for any long-term significance, because there is none.”

Resist the first person, I was told, because your voice can make you feel important, but only to you. Build esteem outside flattery so that assertion grows more assured. Set the bar high and be careful with the word unique; little is. Oppose ego with nuance; establish priorities. Be modest. Prepare to be wise.

Long-term significance existed. Life was not a game. There was a princess, tangible or symbolic, and finding her was part of a wider search for self and meaning. Nothing was a click away but much was worth working toward. And now? Everywhere the “I,” but blackened.