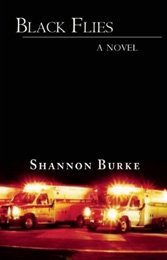 About midway through Burke’s stunner about New York paramedics comes an image so ornery and carnal and surreal the novel is imprinted by its shadow. EMS technician Ollie Cross (a “swanky” middle class Chicago boy) and his Vietnam-vet partner Gene Rutkovsky (“dirt-bag medic for life”) find an overweight naked woman strolling down Broadway. A hospital intern tries to get her name. “She didn’t answer, she just sat there moving her mouth around, then reached between her legs, dug around a moment, pried out a dark, rotten, leafy vegetable of some sort and began eating it. The intern looked wild. I was stunned myself. Rutkovsky turned away and kicked at the wall with his boot. He kicked again then again, eyes tight knots of skin, like he was trying to kick the image out of his head.”

Burke mines drop-dead gorgeous horror so well that he transforms it into a parallel normalcy, which is the story’s backbone. He spent 11 months as an EMS technician in the early 1990s and his second novel is more “faction” than fiction. Cross, 23, is thrown in with group of medieval veterans in a primeval city swamped with sick ghouls and freaks — “skels,” they’re called. It’s a coming-of-age story by way of amorality with compassion at its core.

As he showed in his first novel “Safelight,” which broaches this territory, Burke has an ear for the language of men and its chameleon bravado. Cross to Rutkovsky, who is on the brink: “I thought you hated the job?” Rutkovsky: “I do. But I hate everything else much more.” Imagine Scorsese’s “Bringing out the Dead,” excise the maudlin, and multiply by 10,000. Sadism made to marry altruism in plain site. Extraordinary.