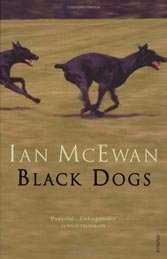 Before fame, fortune and a series of British soil novels, Ian McEwan was a traveler in search of larger and more sinister truths, which he then deftly inserted into compact novels that seemed to be about mundane things, in this case a seemingly innocuous family recollection that, when allowed space, acts as a trap doors for visiting ghouls.

The narrator is Jeremy, who was orphaned as a boy and has become fascinated by his wife’s parents, Bernard and June Tremaine, whose life and times he is piecing together for a memoir. For him, their roots reflect a century of complex European history, including their own fairly typical British postwar dalliance with communism. But June will “defect,” becoming like a Graham Greene character, yearning for God and seeking His meaning only.

What apparently caused that change was an incident in southern France, where Bernard and June, while trekking, became separated, forcing each one to suddenly and unexpectedly reckon with the real and mystical landscape of self and history. June can trace her transformation to a confrontation with two black dogs, the hounds of hell that forced to consider other infernos, since France was sullied beyond recognition in World War II.

For alert Europeans, this is McEwan’s most insightful and accomplished novel, a spare and clever metaphor for the consequences of collaboration: France, and most of Europe, capitulated; England did not. Communism seemed hopeful but was not.

McEwan’s British “interlopers” — the critical action occurs in southern France — sense that something was and remains amiss, perhaps irreparably so. Bernard, the rationalist, and June, the Christian, cannot bypass war’s leftover contagion. It’s their family secret and a haunting. June’s recollection of her encounter with the dogs — the Gestapo used dogs to “tame” locals during the occupation — is a parable for the iridescence of evil, and the passivity it induce even among those nearby the worst of it: the nearby French mayor sends no one in pursuit of the dogs, despite June’s concern (says Jeremy: “… if one dog was a personal depression, two dogs were a kind of cultural depression, civilization’s worst moods.”) Bernard in turn has his own troubling side-story, a chance encounter with neo-Nazis amid the fervor of the fall of the Berlin Wall, adding a yet another European admonishment.

McEwen handles parable, allegory, and metaphor with the skill of a diamond cutter. Nothing here is overwrought. All is telling. As for the title, “black dogs” are what Winston Churchill called his bouts of depression, adding yet another layer to a short novel awash in dreams, and nightmares.