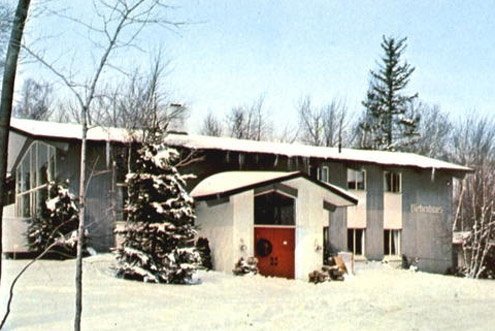 The Stratton Mountain resort: Too simple to endure.
S

he’d known that the Birkenhaus, the Austrian-styled inn that opened to the mountain’s visitors just one year after the mountain itself opened for skiing, would be bulldozed. There wasn’t enough money in it anymore. Apparently Austrian charm and 50-year-old traditions didn’t turn a profit; massive hotels, condo complexes, and slick, modern logos did.

Or so the story went.

As someone who had worked at the Stratton Mountain resort for almost as long as it had been around, she was something of an institution. So when the order came to raze the Birkenhaus, she was at least told. When she wanted to go in and save as much memorabilia as she could from its dumpster destiny — the framed prints, the signs, the little carved bears — she was allowed to do so.

And when the bulldozing began several days before the assigned date, she got the early-morning call. Raced there in her nightgown. Saved the day. And saved a few more signatures of history.

I’ve been visiting this mountain ever since I was a toddler too small even to put on skis, never mind know what to do with them. I’d seen Stratton in its heyday, when Austrian flair was everywhere, thanks in no small part to the much-loved Austrian ski school director and other Stratton employees. Black bears roamed the woods. Instructors wore red knit sweaters with the mountain’s bear-claw logo. Après ski meant the Stratton Mountain Boys, a band founded by Austrian Vermonters in 1965, playing their Tyrolean beats, yodeling, and encouraging tired skiers to participate in the “chicken dance.”

It was for those Tyrolean evenings and not Halloween, I’m sure, that my grandparents had bought me lederhosen from Germany. And, to this day, we still have an uncounted number of cassette tapes stored somewhere in the basement. They’re the prizes of the Stratton Mountain Boys’ alphorn contests, when they’d invite anyone to come up and blow the some six-foot long wooden pipe. And I mean anyone. Contest after contest, a small, red-cheeked girl would trot up to give that alphorn everything she had. She sometimes wore lederhosen.

But the mountain changed. In 1994, it was purchased by a real estate development firm that would go on to acquire Steamboat, Snowshoe, Mammoth, Copper, and Whistler, all resorts from regions as far-flung as Colorado, British Columbia and West Virginia. Old-timers immediately started noticing, and complaining about, the shift in focus.

Enormous complexes and million-dollar homes sprang up along snowy trails as easily as pop-up books. Vermont license plates became scarce as three-foot powder. Prices of everything from lift tickets to lunch shot up, but fewer and fewer people brown-bagged.

The Stratton Mountain Boys were sidelined and eventually disappeared altogether from après-ski. (You can still hear them play at a variety of Oktoberfests and other concerts worldwide). The mountain’s logo changed, replacing Gothic-style font and black bear with sterile lettering on a red background. Only the smallest imprint of a bear claw was left, as if the bear itself had gotten up and walked out of the frame. I even remember a ceremony involving carved bears being lopped off the tops of fence posts, something that always seemed to me more gruesome than celebratory.

In 2005, the last bastion of tradition fell. The Birkenhaus, founded by that same favorite ski school director, host to celebrities including the Kennedys, and employer of Jake Burton, who bartended there while experimenting with the world’s first snowboard prototypes in its basement, was bulldozed.

Expensive condominiums were everywhere. So were boisterous New Yorkers. Lunch cost $15, and during après-ski, the alphorn, and the Alpine band, was nowhere in sight.

But traces of the past remained, including the restaurants I ate at as a little kid, tucked up into the corner, nursing hot chocolate, feet swinging in absurdly clunky ski boots. So did the ski trails, though more bereft of snow than I’d ever seen them, and a handful of the people, including the Austrian photographer who had captured the image of my family that for a season had welcomed would-be skiers on the cover of the Stratton brochure.

In the little village, some of my favorite haunts as a child — the bookstore, the candy shop – were gone. A sushi restaurant had moved in. So had more chains. But there was also something else new: a small space devoted to celebrating Stratton’s 50th anniversary. The walls were decorated with memorabilia. Some of it had been taken from the Birkenhaus by the woman determined to preserve Stratton’s history, in spite of it all. She asked my family to submit our old season’s passes, our brief moment of fame on the brochure and another on a poster, to decorate the space. It turned out that we were part of history, too. More importantly, we could help preserve it.

I felt better about the changes to my childhood home and haunt. But even that wasn’t as gratifying as leaving the mountain and seeing, at the entrance, an old sign that I could swear long ago been replaced by the newer model. The sign said, simply, “Stratton.” But the lettering was Gothic — and on the side, a black bear stood proudly.