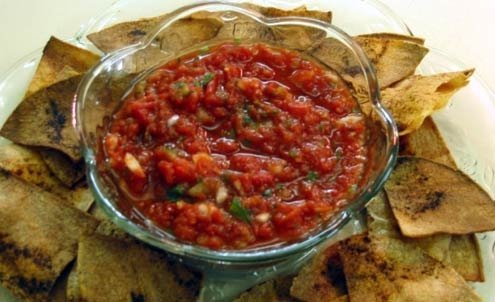 Good luck finding this...
I

recently boasted to my Facebook friends — albeit half-heartedly — that I am a better cook than most chefs in Rome. My facetiousness was plain, yet I was dutifully ribbed for my audacious braggadocio. I quickly amended my statement by emphasizing that my sphere of reference is limited to those restaurants I can afford to eat in.

My chutzpah soon fizzled into the sad realization that, being a regular working citizen, perhaps I am not able to live my wonderful town to its fullest potential. I no longer go to see museums, once-in-a-lifetime art exhibits, summer concerts, or treat myself to occasional overspending on such supercilious satisfactions as a meal in an excellent restaurant in a city famous for its food.

At least some of this is my fault, though. I’m a notorious complainer, a quality I have clearly inherited from my mother. At times I embarrass my company by taking uneaten food home in a doggy-bag (try this if you want to see an Italian turn sheet-white). I make no bones about protesting the price of peanuts in bars that make you pay for them. And when I ask for the check, I insist that it be written out item by item, in order to avoid the mysterious totals that Roman restaurateurs are famous for.

I’ve been overcharged so many times that I no longer trust even the friendliest — especially the friendliest — waiters. Their joviality often conceals knavery. And, truth be told, I’ve still not had that one memorable experience of fine cuisine that makes it all worthwhile. I eat better from my own kitchen.

When my friend Laura invited me to her annual birthday dinner this year, I declined. Well, I wasn’t so callous as to pull out altogether, but I did attempt to change the venue from Chinese to Thai. I explained that I don’t like Italian Chinese food, as opposed to American Chinese food.

Having no idea what Chinese Chinese food is, I didn’t want to be too general in my condemnation of it. But Chinese food, as adjusted to the Italian palate, is downright rudimentary — like spaghetti-and-meatballs in 1960s America.

I admit my options for eating out are limited.

In America I can splurge for Mexican on Monday, Thai on Tuesday, and Hawaiian on Wednesday. But in Italy, ethnic eats are still in a stage of arrested development.

And here’s the proof: you cannot find a Mexican restaurant here that understands the concept of chips and salsa. That chips and salsa is a concept, and not an antipasto. Unlimited chips and salsa is the Magna Carta of any self-respecting Mexican restaurant. So forgive me if, staring down at the piddly tea candle-size portion of salsa accompanied by eight hamantashen-shaped corn chips — for €4.50!!— a droll frown falls across my face. I am only remembering my homeland, where portions are big and prices are proportionate, and a burrito is not filled with zucchini and white rice.

Add to this the culinary xenophobia in some sectors of Italian society, which maintains that Italian food should not be “corrupted” by non-Italian chefs. Just think how far this is from an American perspective! American food is nothing — America itself is nothing — without the feared contaminazione, or cultural contamination, that drives many an Italian purist to an early grave.

“If you can read, you can cook.” Has a more liberal and democratic phrase ever been spoken? And even if you can’t read…you can still cook. I mean, where else is the vitality of contaminazione more evident that in Italy’s beloved cuisine? The tomato, that most Italian of fruits, is of Mexican provenance. The eggplant and the artichoke were brought up through Sicily by Jews and Arabs. There is even a hypothesis that pizza stems from the word pita, the Arab flatbread par excellence. Of course there is no end to this kind of conjecture, but the supposition that Italian food is in any way exclusively Italian is sheer distortion of the facts.

At home I delight in this interplay. My cooking is nothing if not fusion, a kind of bitches’ brew, in constant flux between the cultures I have inherited and continue to inherit. There is nothing unusual about couscous on our table, garnished by tuna salad or artichokes alla romana. There is a strong Sicilian strain, meaning lots of capers, olives, hot pepper and anchovies. There is a general absence of pork and meat-with-milk dishes — a nod to the Jewish dietary laws. And, of course, in winter we hunker down with mushrooms galore and heavy cream, from my girlfriend’s Umbrian inheritance.

The truth is that, before marooning myself on this peninsula without a plan, one of my unstated goals was to learn to cook. I reasoned that if I took nothing away from my time as an Italian in Italy but the ability to “boil water,” as they say, it would have been worth it. Of course, I have found much more that boiled water in this place. My cooking is not exceptional, but it does reflect who I am. It is the cuisine of cultural contamination, and that is its excellence.