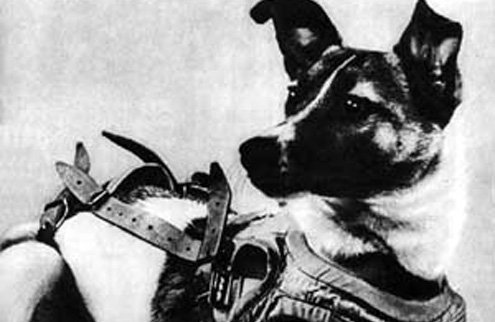 This is not my decision.

Given a choice, I’d prefer to marvel at George W. Bush defense of Georgian sovereignty. If that weren’t surreal enough I’d daydream instead about Laika, the forgotten Soviet space bitch (a mongrel), or Nicéphore Niépce, whose name I adore and who once spent half-a-day developing the first photograph.

But no. The girl who might join me on a date — in my head of course — insists I ZAP her. “I’m tired of having to go to parties and get drunk to try to find a guy,” she explains sweetly (and not only to me). Quaintly, she adds: “I love renaissance festivals and anything medievil.”

But then the hammer falls: “Don’t bother emailing me,” says my beloved, “if you don’t have a zombie apocalypse survival plan.”

Telling her I misplaced it seems feeble. So does distracting her with Laika the Space Bitch, as in “my dog ate it.” Mentioning Nicéphore Niépce is tantamount to ordering “medievil” French food.

To her credit Laika nailed the apocalypse part. The Russians launched her 40 years ago to see if an “earthling” — what a supermodel word! — could survive in orbit. The Moscow mongrel was the atheist state’s canine Hail Mary. But the capsule thermostat went south and Laika — whose name meant howler — got the wrong kind of hot. Howl indeed. She burned up. The dead bitch orbited Earth on Moscow’s behalf for a week (which is how long the official version said she lived). If she saw zombies she never barked. Totally bad planning. Vodka-drinking cosmonauts followed.

Nicéphore Niépce’s fortunes were only slightly better. While on a farm in eastern France in the summer of 1826 he decided to play with his camera oscura (a light box for the apocalypse, if you will). He lived near a barn and pigeon house. Bored, the Nicé-man did what most quirky 18th century Frenchman did before cable, he invented. He pointed his light box at the barn, added pewter and bitumen, waited eight hours, and baked the world’s first snapshot. But when he showed off his black freeze-frame (oblivious to his oxidized hands), farmhands fled. So did three pigeons and a mule. The zombies followed. But when the image faded the duped zombies returned in a rage. As a result, a nothing-special Moon crater bears Niépce’s name. More bad planning. Kodak came later.

Georgia had a ZAP that called for taunting Russia. It failed.

Iraq had a ZAP that insisted on sovereignty. It also failed.

Bush and Phelps — industries in the their own right — also have ZAPs. So does Barack Obama — though his is intended to cope with postmortem Hillary. None of them are doing lunch, however.

Which leaves me with Kung Fu Rodent in Wisconsin. He anonymously offers online ZAP outlines free of charge. He emailed Georgia to be prepared but no one listened. “If there’s an undead army out there,” says Kung Fu Rodent, “I want to have my own.”

Kung Fu Rodent is a handy man to have on a blind date.

I tell him, “Dude, I need a zombie plan,” to which he promptly answers, “renaissance or medievil?”

His much-appreciated tips, saintly, come marching in. Among them, word-by-word:

— “Put on as many different layers of clothes as possible (editor’s note: for zombie bites);

— “Have a bunch of frozen deer meat in your freezer;

— “Take all the bags you can carry, plus your bat, and procure a vehicle preferably a truck;

— “Set up a temporary home base of opperations in an apartment (note tricky spelling);

— “Go to the west for mulitple reasons. 1) less people = less zombies 2) wide flat spaces = seeing them coming after you (at least better than say in the woods).”

I rework this sovereign wisdom into my own language adding one crucially important anti-zombie ingredient, “Always pray to the Mongrel Goddess Laika.”

When me and my girl get to the “medievil” festival, saved by a bitch, I know she’ll thank me.