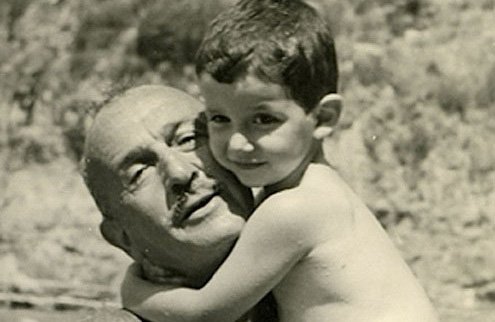 y father had a birthday last week. No big fuss. Never is with him. He asks me, “Do you remember that time at the airport?” I do.

The flight was from Rome. He needed badly to be on it, on time. But then came the Palestinian bombing, the charred carcass of the plane for all to see, and we left 10 hours late.

I said, “This is my father,” “E mio padre, vi prego.” Please. Halting, desperate words, mine, to no avail.

We had to take the flight and we did, though too late. It was the dead of winter, snow on the ground.

My father’s birthday never falls on a day history revels in, at least not to his knowledge, or so he insists. I age on the summer solstice, my mother on Christmas Day. He has only October 16.

Only, I say! Remember the pope? He does. The big and unexpected Pole he saw from a different distance than mine; I was in the square.

So where were you, I ask?

My father isn’t listening attentively. He wants no fuss on his birthday. He asks, Have you been back to the hotel?

Yes, I say. To the Inghilterra, where he often met my mother. Rome then was swelled with claxons and dingy rooms.

Not dingy now, I tell him. Upscale. Probably not as nice to make love in, I say. He smiles. Rome has changed, he says, turning down his small mustache with thumb and forefinger.

My father recalls a tailor, Carini, he says; yes, Carini was his name. Made ties and shirts. Perfect ones. In two days.

You picked the silk, because it was always silk, and Carini (who could not write, my father says) rubbed the backs of his hands on the fabric as if they were on his shapely young seamstress, in bed.

The seamstress’s name was Rosa, he says. But there’s more. Sometimes it was Rosa who’d ferry them to the hotel, before the Inghilterra a smaller one, the Maraschi. And before that Rosa had brought them directly to the apartment on the wrinkled flanks of the Spanish Steps.

A man of secrets, my father didn’t tell his wife, his second one. She’d busy herself painting watercolors of the small motorcars navigating around Bernini’s Boat, and then scurrying off toward the Babuino. Malaparte would come by.

I ask, Did you call it the Babuino?

In those days yes, he says, that’s how it was. We’d just say “the” Babuino, the big baboon, and we’d walk smoking stubby cigarettes to the Popolo, where we tasted amaro and talked politics and envied ourselves our life in Rome that no one could take away.

So what did you do on your birthday, I ask him, before visiting me?

He goes silent, buttoning up the white shirt he’s taken down from its hangar, hitching it to the dull brown arch of the chair.

To my question he asks, Are you seeing someone now, a woman?

I shake my head, uninterested.

I was married three times, he reminds me. Helen began it all, he says, and I know. They were both 16, in Brooklyn, and fudged the marriage rolls. I suddenly imagine the two of them in Moscow (did you go?) and Paris (yes, you went).

Helen was a redhead with red lips like razors.

We never do much, my father and I, on his birthday. Usually it’s mostly banter, like this, half-thoughts barely graced into speech.

What about the war in the Middle East, he wants to know. Has it spread? I say nothing.

He says, Did you read my letter with my latest opinions, the one I posted to you from Africa? Yes, I answer, the one that said the power of governments would be dispersed into smaller groups, offshoots, each one ready to make a mark, to be bold.

These days we all sleep less because you were right, I say. We don’t know what comes next. But you never know, says my father, slipping on his cufflinks. History’s taste in events is mischievous. We pass through history seeming to believe we shape it, but we’re on a leash.

So what about the girl, my father asks abruptly, the one in London. You look so weary today. Yes, I say, I feel weary. She left me, I tell him finally. She left you, he exclaims, raising his voice, flaring his nostrils. Appalling, he says. You’re not young anymore, figlio mio, but you know that.

I know that, I say. But she left, so here we are, father and son, in Rome, together on an October night. It’s just us, Dad. Maybe we can talk longer this time.

But don’t we have the plane to catch, says my father, examining his watch, the Longines he’s been wearing since I first remember him (Look at it, he says, such a proud watch!) Don’t we have New York to fly to, then Washington, don’t we have a bit of traveling together?

Yes, we do, I say, but I know the truth. We won’t get to the airport until my father is tired, and when he’s most tired is when we’ll hear about the explosion, maybe a grenade (it was in the newspapers), and I’ll begin to plead again. Mio padre. E lui. And he’ll seem so defeated before we board, sickened, in December 1973. And two weeks later, on a January night, we will say good bye.

But it’s not yet come to that.

It’s still my father’s birthday and tonight we’ll go walking along the Corso, in winter’s rising bright neon, past the Schostal window, and he’ll pick out my shirt, and I will imagine a woman called Rosa, her small fingers on silk, then floating over his back, in the 1940s. Maybe he took her to Capri, his shirts neatly arranged in a small valise. A train is what I see, headed south.

Do you miss me, he wants to know? I try to nod, but he interrupts: Remember, it’s no big fuss. Really. It’s just me, visiting. Your father in Rome, and he smiles.

Next time, I promise him, I’ll take my own girl to Capri and I won’t look back.

Good, he says, it will do you good. That way you won’t need your old father’s visits. Your memories will belong to you.

But my train doesn’t leave and by morning he’s been gone a while, until October.