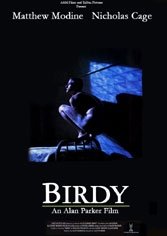 The decade following the end of the Vietnam War brought ruminations to fit every taste: severe, sentimental, realistic and maudlin. Jungle trauma and home-front alienation were attached at the hip. Alan Parker’s quirky film borrows from each of these approaches while finally serving up a different flavor.

Boyhood friends Birdy (Matthew Modine) and Al (Nicholas Cage), one shuttered in, the other a confident ladies man, both misfits of a sort, are storm-tossed into war. Each emerges badly scarred, with Al disfigured and Birdy hospitalized in a psychiatric ward with profound post-traumatic stress. The stage-play conceit is that Birdie was always a little mad, a semi-autistic, sexually unconscious young man who lived for (and through) his beloved canaries. A Lennie Small for the 80s, he dreamed of flying free and finding peace outside social norms.

When Al is summoned to Birdy’s ward in a last-ditch effort to rouse his now-silent, broken friend, past meets present through flashbacks. Times spent in their old south Philadelphia neighborhood are doused with bloody cupfuls of Vietnam horror. As always, war cripples the joy and awkwardness of youth. Except that Birdy’s youth was mostly in his head.

Modine looks and behaves his off-kilter part, androgynously delicate and coiled; Cage, saddled mostly with preachy, self-indulgent dialogue about war’s folly and the idiocy of meddling shrinks, fares less well. What works is Birdy’s bird-love; what doesn’t is the film’s coercive connecting of obsessive madness to a war that in many cases doesn’t concern it.

Parker produces some exceptional moments, thanks in part to a fine Peter Gabriel soundtrack. He also constructs a kicker so delightfully subversive it’s hard to know just how seriously he took the Vietnam motif.