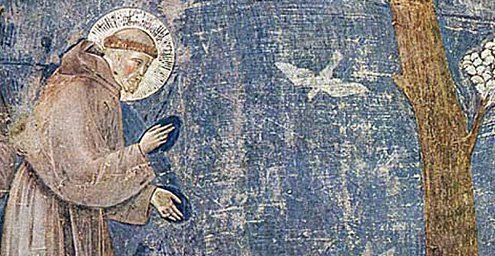 Blessed are the birds…
Y

ears ago, before Milan Mayor Albertini made it illegal to feed pigeons, Signora Briante, the old lady who lived upstairs, would shuffle down the sidewalk to the little park, wearing house slippers and a black wool shawl, leaning on her cane and clutching a paper bag full of crumbs. The pigeons would swoop in and cluster round. To anyone who would listen, she’d say, “Saint Francis fed the birds.” If the birds came too close, she’d strike at them with her cane.

After the law changed, two vigili urbani, one on each arm, ushered Signora Briante out of the park and accompanied her home. When she insisted that the pigeons needed bread from Adriana’s Bakery, they warned she’d be fined if she tried feeding them again.

From then on she threw crumbs from her fourth floor balcony. We’d hear her cane, overhead, thumping across her apartment floor, from living room to kitchen, and we’d see crumbs floating down, like clouds of gnats, drifting to the balconies below, and to the sidewalk leading to the main entrance. Pigeons swarmed in, leaving their messes behind.

The portinaia, lady caretaker, taped a notice to the door, reminding residents that pigeons were dirty, their droppings a health hazard and, if she had to spend her time cleaning up after them, she’d be forced to neglect other duties.

The crumbs continued to flutter down.

“Villana!” shouted Signora Cipolla on the first floor. “La Briante does it on purpose. She wants them to dirty my balcony. Shoo!” She clapped her hands but the pigeons only circled round and returned to their perches.

Before long a forest of colored pinwheels adorned Signora Cipolla’s balcony wall. This worked for a while, forcing the pigeons to detour up to the second floor.

On my third floor balcony, the crumbs attracted cheery sparrows, who built a nest in the narrow space above a window shutter. At 6 a.m. I’d awake to a clackety lawn mower sound. It was the chattering little birds taking dirt baths in my flower pots. The dirt sprayed in all directions, leaving roots exposed. The signora on the second floor, tired of sweeping up, covered her pots with metal netting.

I enjoyed the sparrows. In summer, when windows remained open, they’d hear my daughter playing the piano and join in singing. Every now and then, one would hop right into the kitchen. I never fed them but they ate the cherries from our balcony cherry tree and, after a rain, they drank water from the flower pots.

Meanwhile, the pigeons refined their flying skills. Pinwheels no longer stopped them from zooming in and perching on Signora Cipolla’s balcony. She muttered, “Maledetta strega!” — Damned witch! — and threatened to have Signora Briante locked up. She installed a scarecrow on her balcony and, using a clothesline, dangled wads of aluminum foil like Christmas bells. The pigeons got used to them in no time. Signora Briante’s sly monkey-face peered down to view her handiwork.

The second floor family solved its pigeon problem by getting a puppy that liked barking at birds.

Signora Cipolla’s next move was to cut plastic drinking cups into spikes and glue them to her balcony wall. She chuckled smugly when the pigeons flapped past her, and past the barking dog, to land on my third floor balcony, where Signora Briante’s crumbs were waiting. It took them about an hour to drive away the sparrows and completely foul my balcony wall. If it weren’t for that, in the contest between Signora Cipolla and the pigeons, I would have rooted for the pigeons. Signora Cipolla, straight and rigid as a grissino, never spoke to me except to complain and barely said buon giorno when she met me at the elevator. Years ago, when my toddler son’s toy car rolled off our balcony onto hers, she refused to give it back. I admit I smiled when a pigeon sailed over Signora Cipolla’s spiky cups and landed on her windowsill.

Fortunately, I remembered that, as a child vacationing with my parents at a Michigan lake, there was one way to keep seagulls from roosting on docks and boat lifts: Fishing lines, one above the other, strung taut between poles, made it impossible for birds to land. The nearly invisible fishing line worked for me now in Milan, baffling Signora Cipolla, who lamented life’s unfairness. My balcony was freed of pigeons but also, sadly, of sparrows.

Signora Cipolla is no longer my neighbor because we moved away a few years ago and, last year, Signora Briante died. All of this came to mind because, this morning, while I was making coffee, a baby sparrow hopped onto the kitchen rug and chirped.